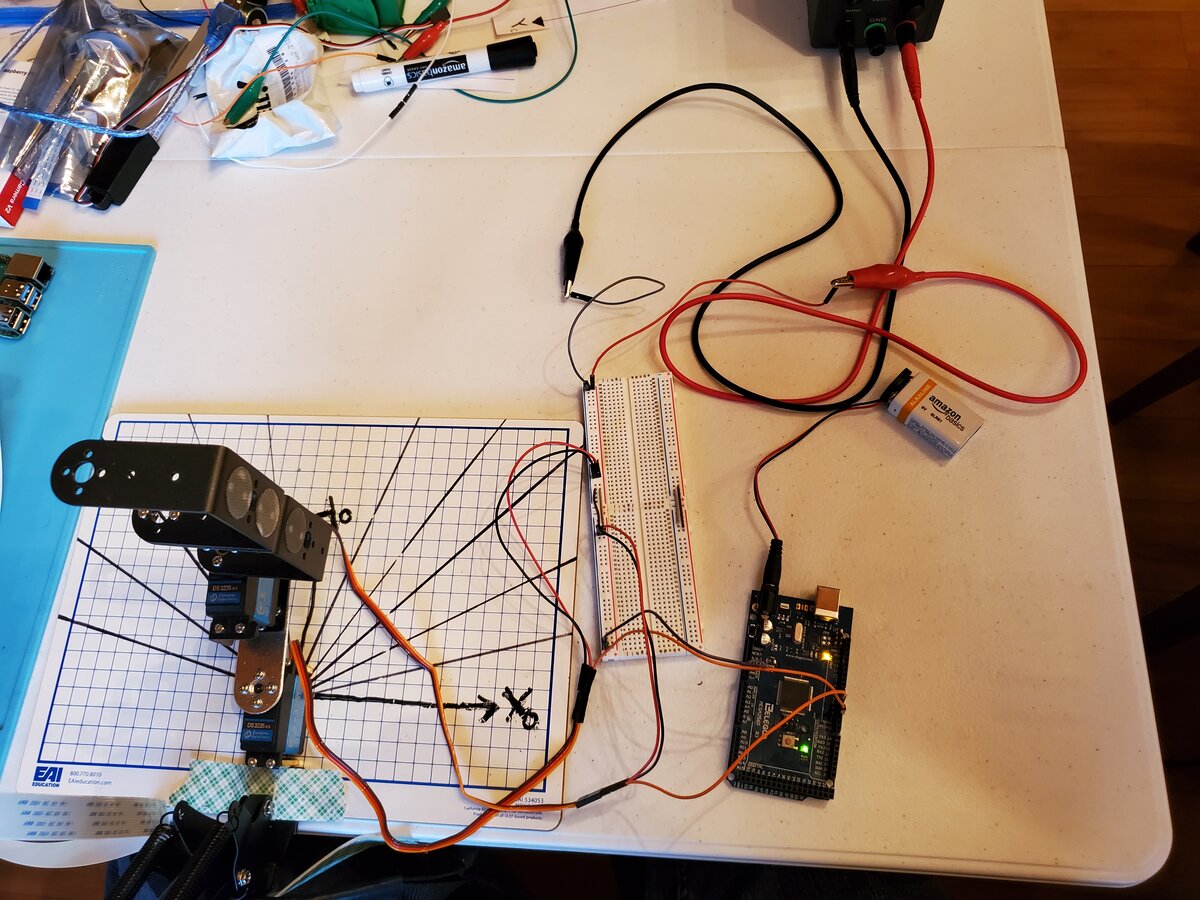 In this tutorial, we’ll learn about the Jacobian matrix, a useful mathematical tool for robotics.

There are some use cases (e.g. robotic painting) where we want to control the velocity of the end effector (i.e. paint sprayer, robotic hand, gripper, etc.) of a robotic arm. One way to do this is to use a library to set the desired speed of each joint on a robotic arm. I did exactly this in this post.

Another way we can do this is to use a mathematical tool called the Jacobian matrix. The Jacobian matrix helps you convert angular velocities of the joints (i.e. joint velocities) into the velocity of the end effector of a robotic arm.

For example, if the servo motors of a robotic arm are rotating at some velocity (e.g. in radians per second), we can use the Jacobian matrix to calculate how fast the end effector of a robotic arm is moving (both linear velocity x, y, z and angular velocity roll ωx, pitch ωy, and yaw ωz).

It is helpful if you know how to do the following:

Overview of the Jacobian Matrix

For a robot that operates in three dimensions, the Jacobian matrix transforms joint velocities into end effector velocities using the following equation:

J is the Jacobian matrix. It is an m rows x n column matrix (m=3 for two dimensions, and m=6 for a robot that operates in three dimensions). n represents the number of joints.

The matrix on the left represents the velocities of the end effector.

x, y, and z with the dots on top represent linear velocities (i.e. how fast the end effector is moving in the x, y, and z directions relative to the base frame of a robotic arm)

ωx, ωy, and ωz represent the angular velocities (i.e. how fast the end effector is rotating around the x, y, and z axis of the base frame of a robotic arm).

The equation using the Jacobian would be as follows:

Taking a look at a real-world example, you’ll see that the SCARA robot that I’ve been building (see my YouTube video here) can only rotate around the z axis of the base frame (i.e. straight upwards towards the ceiling out of the board). There is no rotation around the x or y axes of the base frame.

How To Find the Jacobian Matrix for a Robotic Arm

To fill in the Jacobian matrix, we use the following tables:

Consider the following robot that has three prismatic joints.

Here is the equation with the Jacobian matrix:

Notice that the q’s were replaced with d’s, which represent “displacement” of the prismatic joint (i.e. linear actuator).

To fill in the Jacobian matrix, we have to come one column at a time from left to right. Each column represents a single joint.

Now let’s fill in the second column of the matrix which represents Joint 2. Making i = 2, we get:

Now to fill in the rotation matrices, we need to add reference frames to the joints. This tutorial shows you how to do that. I’m going to use that same graphic here.

What is R01 ? We derived this matrix here.

So now we have:

Writing this a bit more clearly, we have:

Our original equation then becomes:

We can do matrix multiplication on the right side of this equation above to yield six equations:

If we look at the kinematic diagram, we can see if the equations above make sense. You can see that the speed of the end effector in the x0 direction is determined by the displacement of joint 2 (i.e. d2).

You can see that the speed of the end effector in the y0 direction is determined by the negative displacement of joint 3 (i.e. d3).

The speed of the end effector in the z0 direction is determined by the positive displacement of joint 1 (i.e. d1).

The last three equations tell us that the end effector will never be able to rotate around the x, y, and z axes of frame 0, the base frame of the robot. This makes sense because all of the joints are prismatic joints. We would need to have revolute joints in order to get rotation.

Now let’s take a look at another example, an articulated robot that has the following kinematic diagram.

This robotic arm will have three columns since it has three joints (i.e. servo motors). As usual, it will have six rows since we’re working in three dimensions.

Our equation that relates joint velocity to the velocity of the end effector takes the following form:

The Jacobian matrix J (the 6×3 matrix above with the squares) takes the following form since we have all revolute joints:

So using the form above, our Jacobian matrix for the articulated robotic arm is (n is the number of joints):

The x in the above matrix stands for the cross product.

Now, let’s fill in this Jacobian matrix, going one column at a time from left to right.

R00 is the identity matrix since there is no rotation from frame 0 to itself.

We now need to find d03. d03 comes from the upper right of the homogeneous transformation matrix from frame 0 to frame 3 (i.e. homgen_0_3). That is, it comes from the T part of the matrix of the following form:

To get the homogeneous transformation matrix from frame 0 to frame 3, we first have to fill in the Denavit-Hartenberg table for the articulated robotic arm. I show you how to do this in this tutorial.

Here was the table we got:

Now, we take a look at that table and go one row at a time, starting with the Joint 1 row. To find the homogeneous transformation matrix from frame 0 to frame 1, we use the values from the first row of the table to fill in this…

d03  is a three element vector that is made up of the values of the first three rows of the rightmost column of homgen_0_3. I won’t go through all the matrix multiplication for finding homgen_0_3, but if you follow the method I’ve described above, you will be able to get it.

d00 will always be 0, so our Jacobian will look like this at this stage:

Going to the second column of the matrix, d01 is a three element vector that is made up of the values of the first three rows of the rightmost column of homgen_0_1 (which you found earlier).

R01 is below (see this tutorial for how to find it):

Going to the third column, d02 is a three element vector that is made up of the values of the first three rows of the rightmost column of homgen_0_2. Since you know homgen_0_1 and homgen_1_2, you can multiply those two matrices together to get homgen_0_2.

Now in the top half your Jacobian matrix you will need to go column by column and take the cross product of two three-element vectors.

In a real-world setting, you would use a Python library like NumPy to perform this operation. If you do a search for “numpy.cross” you will see how to do this. For example, here is some Python code of how to take the cross product of two three-element vectors:

Now going to the bottom half of the matrix, R00 is the identity matrix.

You can fill in the rest of the bottom half of the Jacobian matrix because we know R01 and R02.

Once you have the Jacobian, you will then have the following setup:

From the setup above, you can find six equations, one for each velocity variable (on the far left). These equations enable us to calculate the velocities of the end effector of the articulated robotic arm given the joint velocities.

To solve this problem, we must use the inverse of the Jacobian matrix.

So how would we find J-1? Let’s take a look at an example.

Suppose we have the following two degrees of freedom robotic arm.

We have the following equation where the matrix with the 12 squares is J, the Jacobian matrix.

Let’s replace those squares with some variables.

To get the J-1, we use the following formula:

So the equation for our two degree of freedom robotic arm will look like this:

R00 is the identity matrix.

To calculate d02 , we need to find the homogeneous transformation matrix from frame 0 to frame 2. We did exactly this on this tutorial.

When you do this multiplication, you get the following:

Based on the homogeneous matrix above, here is d02.

Plugging that into this expression below and performing the cross product with the vector [0 0 1], we get:

J is that big matrix above. Since we are only concerned about the linear velocities in the x and y directions, this:

J is that big matrix above. It takes the form:

Once we know J-1, we can use the following expression to solve the joint velocities given the velocities of the end effector in the x and y directions.

Programming the Jacobian on a Real Robot

Let’s take a look at all this math we’ve done so far by implementing it on a real-world robot.

To do this section, you need to have assembled the two degrees of freedom SCARA robot here.

We want to calculate the rotation velocity of the two joints (i.e. servo motors) based on desired linear velocities of the end effector.

We will program our robotic arm so that the end effector of the robotic arm moves in a straight line at a constant linear velocity.

This equation will come in handy. That big nasty matrix below is the Jacobian. We’ll use it to calculate the inverse Jacobian matrix in our code.

Write the following code. It is helpful to write the code line by line rather than copying and pasting so that you understand what is going on.

Load the code to your Arduino.

Wire up your system as shown on this pdf.

Set the voltage limit on your DC power supply to 6V and the current limit to 2A.

Run the code. You should see the end effector of your robotic arm move parallel to the y axis in a straight line because we set:

After a few seconds, the robotic arm will stop moving in a straight line. The reason for this is that the robotic arm can only move a fixed distance in the positive y direction due to the lengths of the links. The servos, however, continue to rotate until either the first servo or the second servo (or both) reach the limit of their range of rotation (i.e. 0 to 180 degrees).