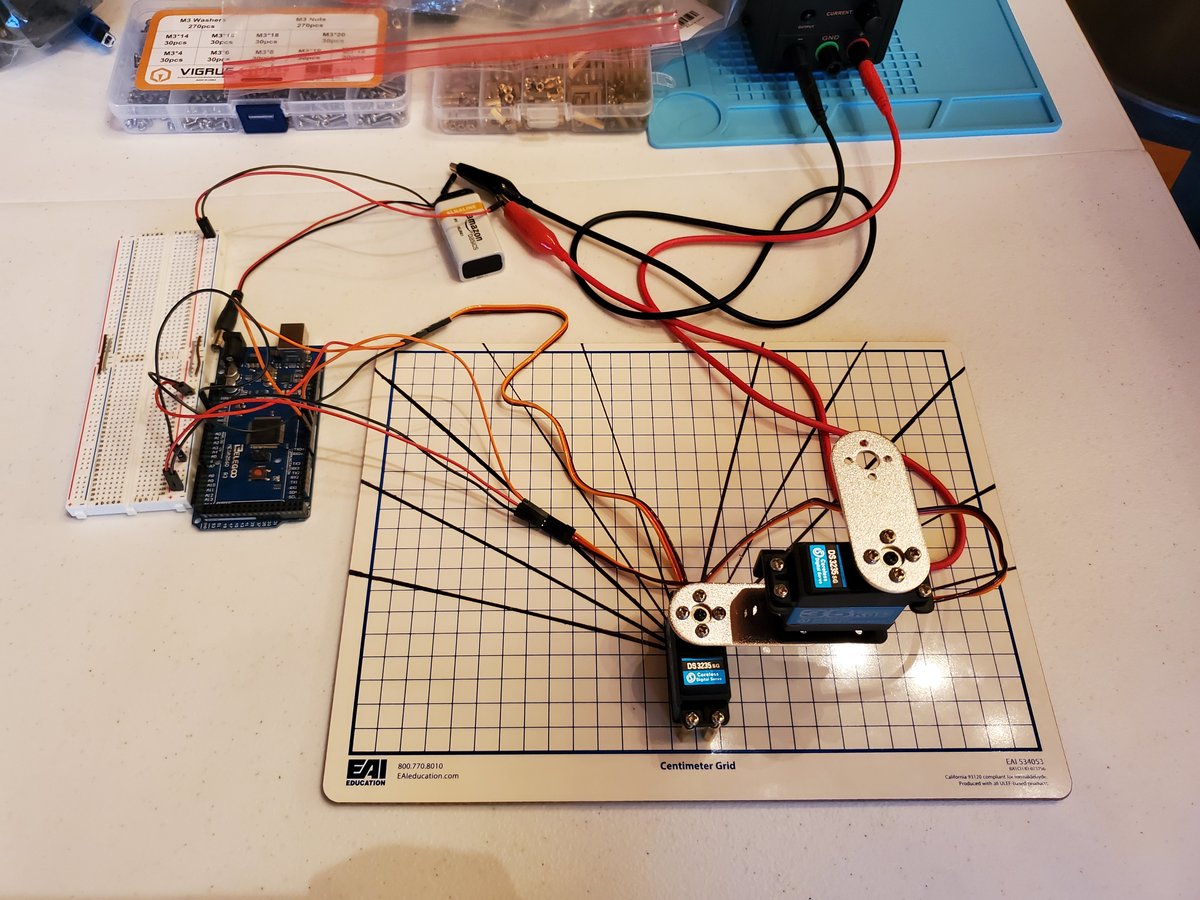 In this section, we’ll take a look at how to build a two degree of freedom robotic arm. The robot we’ll develop will be an early prototype of a SCARA robot.

Special shout out to Professor Angela Sodemann for this project idea. She is an excellent teacher (She runs a course on RoboGrok.com).  While she uses the PSoC in her work, I use Arduino since I’m more comfortable with this platform. Angela is an excellent teacher and does a fantastic job explaining various robotics topics over on her YouTube channel.

SCARA robots are popular in small-scale manufacturing and logistics applications. They are some of the fastest and cheapest robots for pick and place tasks (picking up an object in one location and placing it in another). You can find lots of videos on the Internet showing SCARA robots in action.

The motors we’ll use in this project have a range from 0 to 180 degrees. We want to be able to send commands to the robotic arm so that the servos move to specific angles within this range. This project will be used in my future tutorials on forward kinematics and inverse kinematics.

Forward kinematics asks the question: Where is the end effector of a robot (e.g. gripper, hand, vacuum suction cup, etc.) located in space given that we know the angles of the servo motors? The opposite of forward kinematics is inverse kinematics.

Inverse kinematics asks, what should the angles of the servo motors be if we want the end effector to be located at a particular point in space? In a future tutorial, we’ll also learn about inverse kinematics.

This section is the complete list of components you will need for this project.

Set Up the Initial Hardware

Lay out all the parts out on the table like this:

Grab your centimeter grid dry erase board and the two C-clamps.

Clamp down the dry erase board on a hard surface, like a table.

Mark four holes on the dry erase board using a screwdriver or some other sharp object.

Using the drill, make four 3MM diameter holes like this.

Draw 10 lines on your board…5 lines on one side and 5 lines on the other side. Each line needs to be 15 degrees apart (use the protractor to measure the angle).

You can use some tape and a permanent marker to make sure the lines are permanently on there and are straight.

Put the screws up through the bottom of the board via the holes.

Grab four 20mm standoffs and screw them on top of the screws.

Take one 35kg  servo motor and place it on top of the standoffs.

Grab four 20mm M3 screws and use these screws to secure the servo motor into the standoffs. The screws don’t need to be super tight…just tight enough so that the servo stays in one place.

Grab a servo horn and attach it to the servo gear.

Grab the 6 Channel Digital Servo Tester and either a DC Variable Power Supply or 4 AA Batteries with Battery holder.

Turn on the DC power supply and set the voltage to 6V and the current limit to 1A.

Using the corresponding knob on the Digital Servo Tester, Rotate the servo horn as far as it can go in the clockwise direction. This is the 0 degree position (Note: if you press the little button under the knob, the servo will go to the 90 degree (center) position).

Take the servo horn off.

Grab a servo screw and secure the servo horn on to the servo gear.

This motor, Joint 1 (also known as Servo 0), is now calibrated and complete. If you want to, you can add two more screws to the servo horn so that there are 4 screws that secure the beam mount to the servo horn.

Secure the multi-functional servo bracket into the beam mount.

Grab a 35kg servo and place it into the multi-functional servo bracket.

Secure the servo into the multi-functional servo bracket.

Grab a servo horn, and place it on the gear of the servo.

Secure the servo horn with a servo screw.

Place the three pins of this second servo into the corresponding pins of the 6 Channel Digital Servo Tester.

Once you’re happy with the alignment, use two M3 x 4mm screws to secure the beam mount to the horn even further.

Our robotic arm now has the following components (two joints and four links):

Here is the kinematic diagram for this robot. Don’t worry if you don’t understand it. We’ll learn how to create this in a future post.

In this section, we’ll get the servos moving. We’ll use the setup in the kinematic diagram above.

Follow this pdf diagram to wire up your servos.

Turn on your DC power supply and set it to 6V with a 2A current limit (i.e. 1A per servo).

Write the Code for the Arduino Mega

Sweep and Calibrate the Servos

You should see the same motion as in the animated gif image at the beginning of this tutorial.

You need to calibrate the servos so that the servos are aligned with the 0 degrees (i.e. +x axis) and 180 degrees (-x axis) on the dry erase board. In order to do that, you need to alter the minimum value of 544 microseconds and/or maximum value of 2400 microseconds of the pulse width for each servo until you align with the axes on the board. I recommend starting with the first servo (i.e. servo 0 which is attached to the board), and then calibrate the second servo (i.e. servo 1).

Consider, for example, a robotic arm with a paint sprayer at the end. We want the robotic arm to paint a car. We need to direct the arm to the appropriate position, and we need to make sure the angle of the arm is oriented in a way that directs the sprayer towards the place on the car’s surface you want to paint.

In a future post, we will learn how to calculate the position and orientation of a robotic arm, so stay tuned!