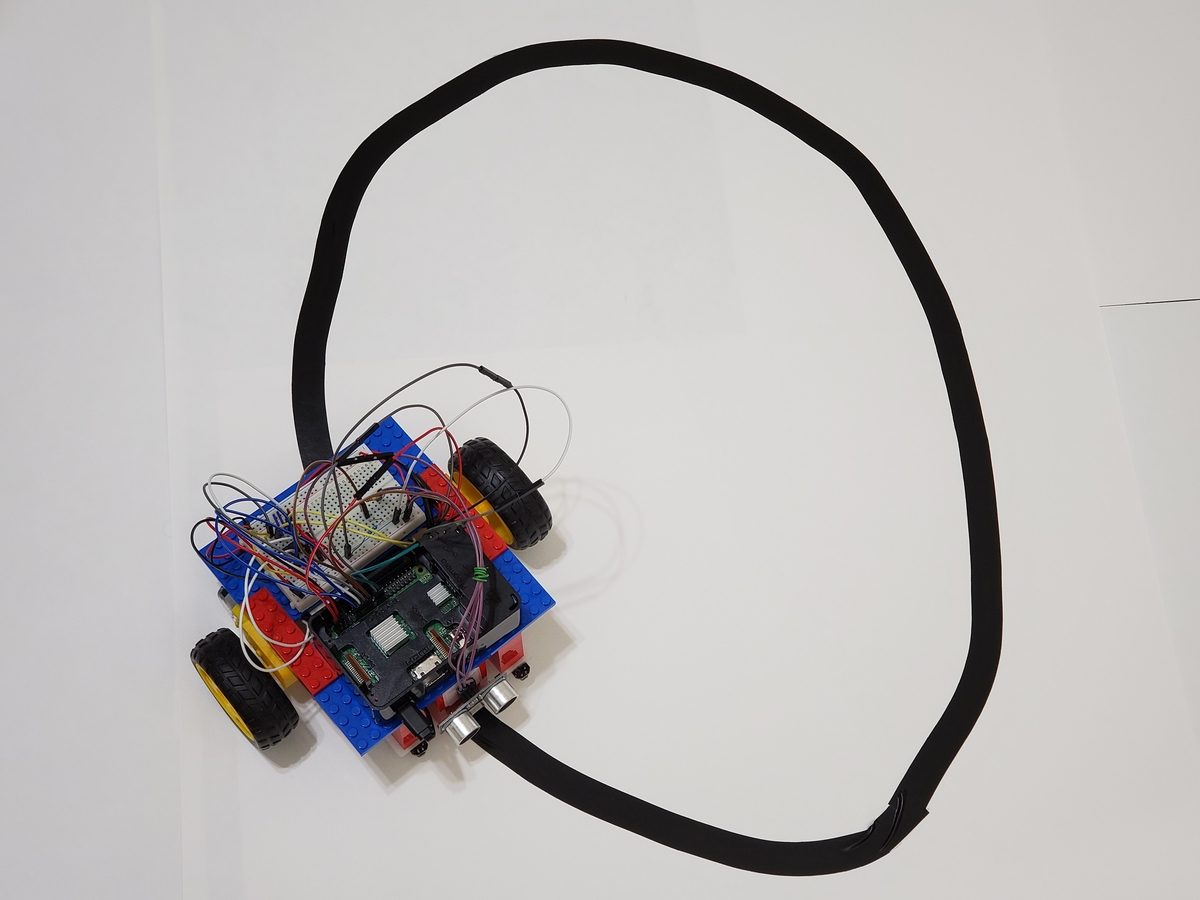 You all might remember the line-following robot I built using Arduino. Well today, we are going to do the same thing, but with a Raspberry Pi.

Connect the VCC pin of the IR line sensor to pin 1 of the Raspberry Pi.

Connect the GND pin of the line sensor to the blue (negative) ground rail of the solderless breadboard.

Connect the OUT pin of the line sensor to pin 21 (GPIO 9) of the solderless breadboard.

Power up your Raspberry Pi, and open IDLE.

Save it in to your robot directory.

Create a line-following course using your black electrical tape and your poster board. It should look something like this.

I recommend leaving a 3-inch margin between the side of the poster board and the course. Don’t make curves that are too sharp.

Run your test program from a terminal window.

Move your track in front of the sensor to see if the terminal prints out “Line detected. “

If you are running into issues, use a screwdriver to adjust the sensitivity of the sensor.

That white and blue potentiometer is what you should tweak.

Connect the other IR line sensor.

Connect the VCC pin of the IR line sensor to pin 17 of the Raspberry Pi using a female-to-female jumper wire.

Connect the GND pin of the IR line sensor to the blue (negative) ground rail of the solderless breadboard.

Connect the OUT pin of the IR line sensor to pin 23 (GPIO 11) of the Raspberry Pi.

Attach the first IR line sensor you wired up to the front, left side of the robot.

Attach the second IR line sensor to the right side of the robot.

Both sensors need to be just off the ground and can be mounted using 2×2 Lego blocks that extend downward from the body of the robot.

A piece of VELCRO is sufficient to attach both sensors.

Run the wires connected to the IR line sensors down through the gap in the robot body.

Create the Line-Following Program in Python

Create a new file inside your robot directory named

Place your robot on your track. Make sure the line-following sensors are directly above the black line.

Verify that your Raspberry Pi is connected to battery power, and your 4xAA battery pack is turned on.

Run your program from inside the robot directory.

Watch your robot follow the line! Press CTRL-C anytime to stop the program. 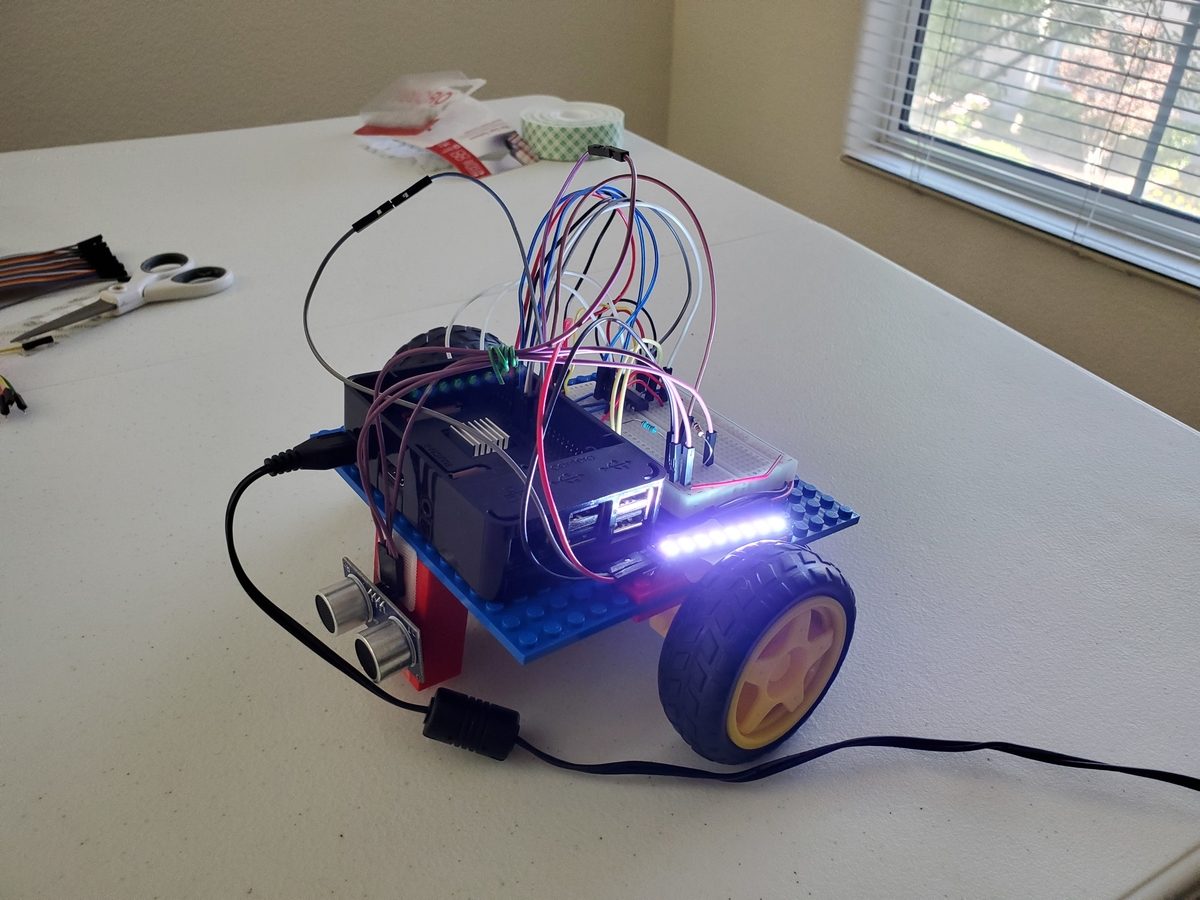 In this post, I will show you how to add light to a Raspberry Pi wheeled robot.

Setting Up the RGB LED Stick

Cut four pins off one of the male pin header connectors with a pair of scissors.

Solder the four pins to the DIN (stands for “data-in”) side of the RGB LED stick.

If you don’t know how to solder, check out my video below.

Connect the 5VDC pin of the RGB LED stick to the positive (red) 5V rail of the solderless breadboard.

Connect the GND (Ground) pin of the RGB LED stick to the blue (negative) rail of the solderless breadboard.

Connect the DIN pin of the RGB LED stick to pin 19 (GPIO 10) of the Raspberry Pi. This is the Master Output Slave Input (MOSI) pin that the Pi uses to send information out via the SPI protocol (more on this in a second).

Mount the RGB LED on the Robot using Velcro. You can mount it anywhere you want.

Power up your Raspberry Pi.

Verify that pip is installed. Pip is a tool that enables you to install and manage libraries that are not a part of Python’s standard library. Type the following commands in the terminal window.

Make sure the SPI bus is enabled.

SPI is a communication interface built-in to several of the GPIO pins of the Raspberry Pi. It is good to use the SPI bus when you want data to be streamed over short distances, continuously with no interruptions.

Modify the Graphics Programming Unit core frequency so that it is 250 MHz.

Scroll down, and add this to the bottom of the file.

The -c at the end makes sure that the RGB LEDs turn off when you type CTRL-C in the terminal window.

Now we will create a program to control the LEDs using our Wii remote. Open a new terminal window on your Raspberry Pi, and go to the robot directory.

Type the following code into the program:

Place your robot in an open space, and run the following command from inside your Pi’s robot directory.

You can press the home, minus, and plus buttons to activate different lights.

Turn off the lights using the B button, and stop the program by typing CTRL-C. 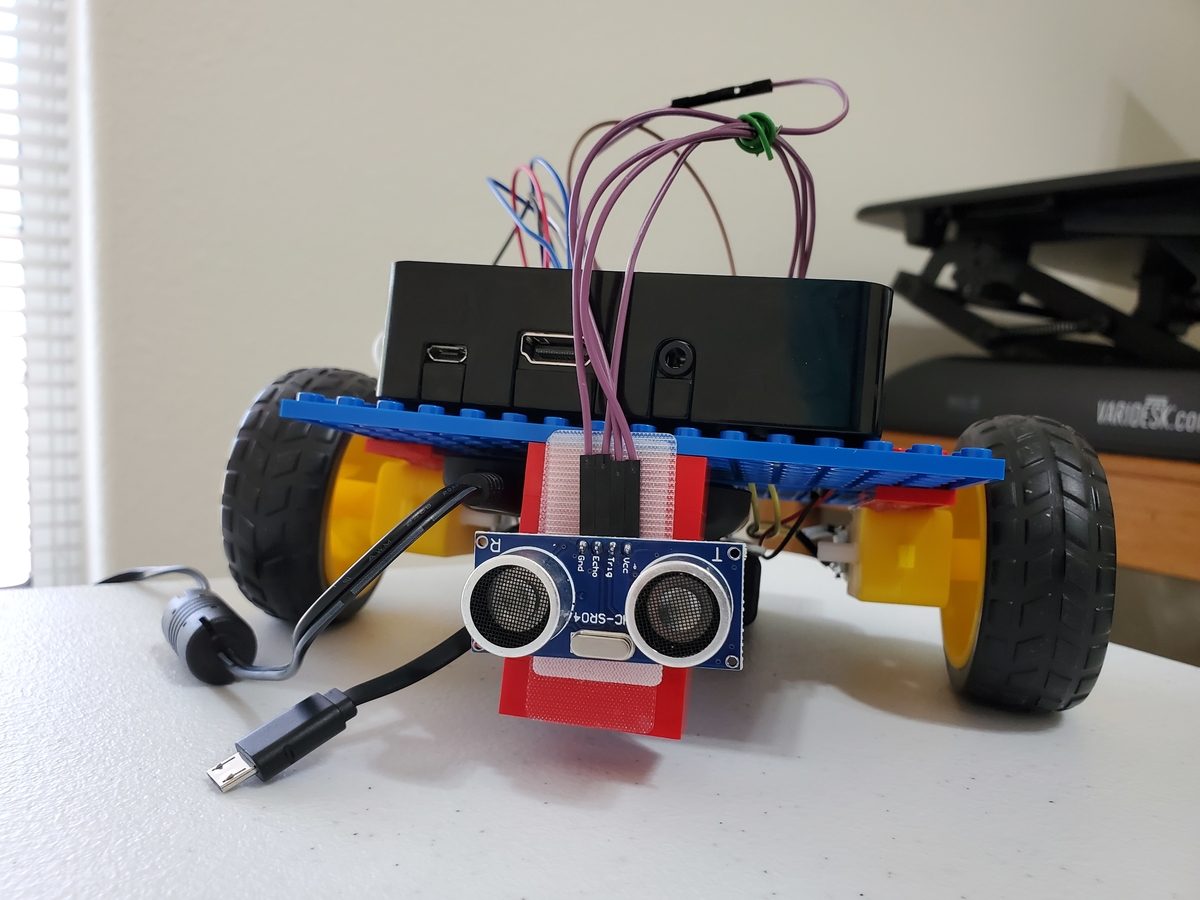 Real-world applications of obstacle avoidance in robotics can be seen in devices such as iRobot’s autonomous vacuum cleaner.

How Distance to an Object is Calculated

In order to give our robot the ability to “see” obstacles in front of it, we need to connect it up to a sensor. We will use the HC-SR04 ultrasonic sensor, a popular sensor in the do-it-yourself robotics world.

The HC-SR04 has a transmitter and a receiver. The transmitter sends out a 10 microsecond sound wave that is beyond the range of what humans are able to hear. The receiver waits for that sound wave to reflect back. The distance to the object is calculated based on the duration of the echoed sound wave, which is directly proportional to the duration the sound wave traveled (from transmitter to object to receiver).

The distance is calculated based on our knowledge of the speed of sound in dry air at 20°C, which is 343 meters per second (1 mile in 4.7 seconds).

Determining What Resistors You Need

We must reduce the voltage produced by the ECHO pin (5V) to a level that the Raspberry Pi can handle (3.3V). In order to transform a larger voltage into a smaller voltage, we need to make a circuit known as a voltage divider. The output voltage of a voltage divider is a fraction of the input voltage.

A voltage divider uses two resistors to divide a single voltage into two smaller voltages. The voltage drop across a resistor in a series circuit is directly proportional to the size of the resistor because of a famous law, known as Ohm’s Law (V = IR; Voltage = Current x Resistance).

So, what do we need in order to build a voltage divider? All that is needed are two resistors connected in series (one right after the other) from the input voltage (the voltage you want to reduce) to the ground. You also need a jumper wire to insert in between the two resistors. This jumper wire is the output (target) voltage of the voltage divider and connects to the GPIO pin of the Raspberry Pi.

Here is a diagram of a voltage divider:

The output voltage (which we want to be 3.3V) is related to the input voltage (5V in our case) via the following mathematical expression:

Notice that the output voltage is the proportion of the input voltage that drops across Resistor 2.

Let’s work with some actual numbers.

Plug these number into the equation. You can work out the algebra with me by hand on a scratch piece of paper. I’ll show my work, step-by-step.

What would have happened if we used a 3000 Ω resistor instead?

Therefore, it is always good to use a resistor for R2 that has a little bit less resistance than what you calculate mathematically. That way you protect your Raspberry Pi from damage.

Connect the VCC pin of the HC-SR04 to the red (positive) rail of the solderless breadboard (the one connected to the Raspberry Pi).

Connect the GND pin of the HC-SR04 to the blue (negative) rail of the solderless breadboard (the one connected to your Raspberry Pi).

Using a female-to-female jumper wire, connect the Trigger (labeled Trig) pin of the HC-SR04 to pin 16 (GPIO 23) of the Raspberry Pi.

Connect the Echo pin of the HC-SR04 to an empty row on the solderless breadboard. I connected it to e26.

Connect a 1 kΩ resistor from a hole on the same row as the jumper wire (connected to the Echo pin) to an empty row on the solderless breadboard. I connected it from d26 to d22.

Connect a 2 kΩ resistor from the same row as the pin 18 jumper wire (you just inserted) to the blue (negative) ground rail of the solderless breadboard. I put the resistor in cell b22 of the breadboard.

Now we need to write some code so that the Raspberry Pi can use the HC-SR04 sensor.

Power up the Raspberry Pi.

Navigate to the robot directory

Create a new program in the Nano Text Editor, We will name it test_ultrasonic_sensor.py.

Here is the code.

You can place an object a certain distance away from the sensor to check its accuracy. Let’s do 12 cm, and see what distance reading we get printed out on the terminal window.

Run the program by typing:

If you get a reasonable reading, move on to the next section below.

Mount the ultrasonic sensor to the front of the robot using VELCRO or permanent mounting tape.

Let’s program our robot so that it avoids any objects that are less than 15 cm away from it.

Since this program will be somewhat lengthy, I will open IDLE, an Integrated Development Environment that makes developing and debugging Python code a whole lot easier than using Nano, the Linux command line text editor.

Click the Raspberry Pi icon in the upper left part of the screen, and go to Programming -> Python 3 (IDLE).

Here is the code for the program.

Save the file as obstacle_avoiding_robot.py.

When you are ready to run the program, place your robot on the floor in a large open space.

Open a terminal window on the Raspberry Pi and type:

Congratulations! You have developed an autonomous robot that can avoid running into objects all on its own.

When you are done watching your robot avoid obstacles, stop running your program by typing CTRL-C.

Potential Improvements to the Robot

Right now, our robot has only one ultrasonic sensor. We could add more HC-SR04 sensors to make our robot more robust. This would require only small modifications to our original code.