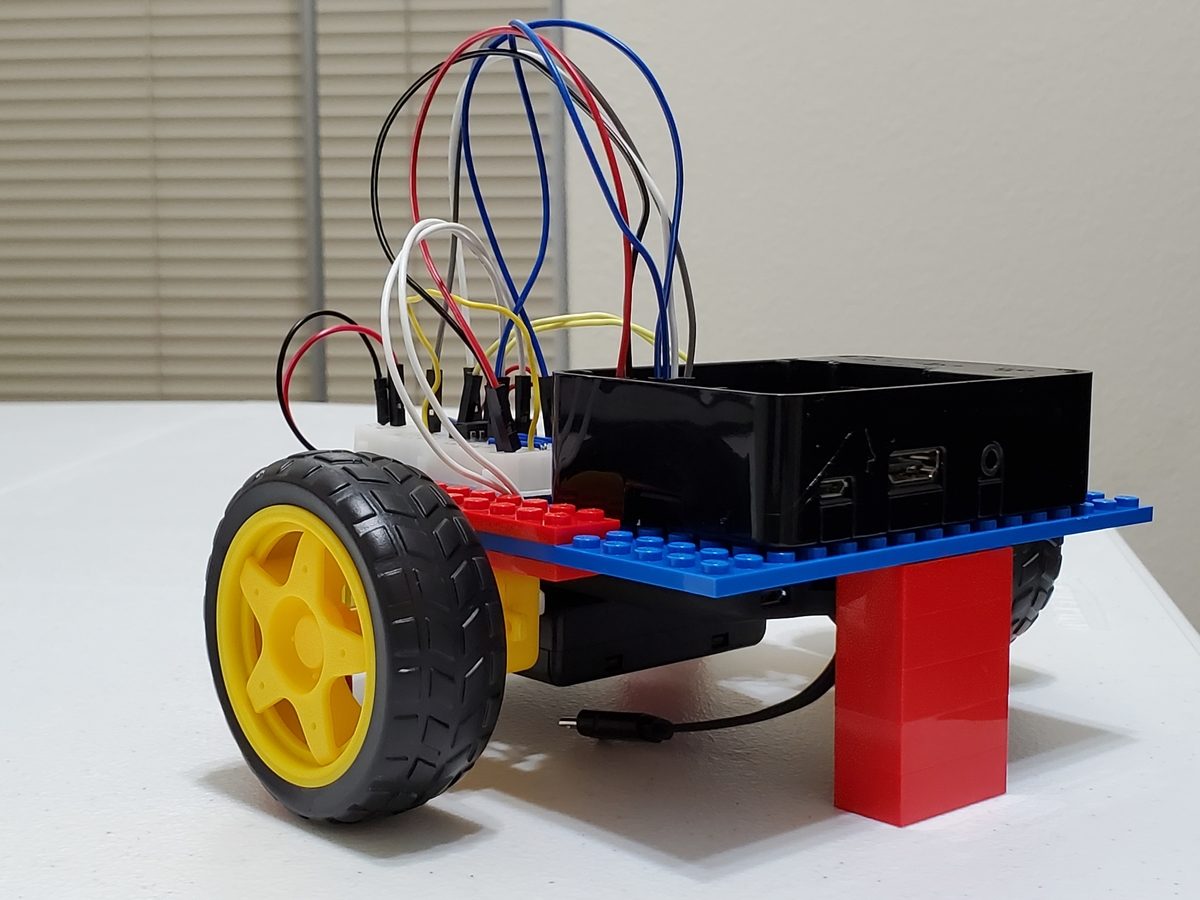 In this post, I will show you how to make a wheeled robot using Raspberry Pi as the “brain” of the robot.

Let’s start by building the body of the robot.

Grab the two 8×16 Lego plates, and place them apart from each other.

Connect the two 8×16 Lego plates with the two 2×8 Lego plates. Place them across to form a bridge.

Solder male-to-male wires to both terminals of each motor (they might already be soldered). If you need a quick tutorial on how to solder, check out this video, or just Google “How to Solder”:

Pop the tires on to the white rod on both motors. Give it a strong push in there. The wheels should be on the other side of the motor terminals.

Stick the motor wires up through the gap in the robot body.

Secure the motors to the body of the robot using your hot glue gun (100W setting). If you don’t want the motors to be permanently stuck to the robot’s body, you can use Velcro or Scotch permanent mounting tape.

Stabilize the robot by adding five 2×4 Lego bricks to both the front of the body.

Mount the Raspberry Pi battery pack to the underside of the robot, slightly off-center of the body, using Velcro or Scotch permanent mounting tape. The small cable of the battery pack should face the front of the car.

Feed the negative (black) and positive (red) leads through the gap in the robot body.

Strip 1-2 cm of insulation off the end of the battery pack wires using the wire strippers.

Wrap the red and black wires of the battery pack around male-to-male jumper wires.

Solder the wires together so that they remain in place.

Apply black electrical tape around the connection once it has cooled.

Giving the Robot a “Brain” by Adding the Raspberry Pi

Our robot needs to have a brain. Otherwise, it is just a bunch of plastic parts that can’t do anything useful. In this project, we’ll use the Raspberry Pi as the robot’s brain.

Grab some Velcro and stick the Raspberry Pi on top of the front end of the robot’s body. Make sure it looks exactly like the image below.

Giving the Robot a “Nervous System”

Setting up the Breadboard

Sink the 16 pins of the L293D motor controller down into the holes of the solderless breadboard so that the controller straddles the gap that runs the length of the breadboard.

Put pin 1 (the pin just to the left of the half-circle notch in the L293D into pin e3 of the solderless breadboard. You’ll have to bend the legs a bit of the L293D to get it to sink down. Note: Ignore the AAA on the batteries below. They are actually AA.

Here is the pin diagram of the Raspberry Pi.

Power up one set of positive/negative rails of the solderless breadboard:

Power up the other set of positive/negative rails of the solderless breadboard:

Here is the diagram of the L293D motor controller.

The motors need a power supply:

In order for the motors to accept commands from the Raspberry Pi, we need to connect both enable pins (pins 1 and 9) of the L293D to red (positive) 5V power rails. Here are the steps:

We need to connect the motors to the output pins of the L293D.

Now, we need to connect the input pins of the L293D to the Raspberry Pi. There are two input pins for each motor.

Whew! That was a lot of work. If you made it this far, congratulations! You have completed construction of your Raspberry Pi wheeled robot.

In order for it to do something useful (e.g. move from one place to another), we need to program its brain, the Raspberry Pi. We will tackle this in the next post.