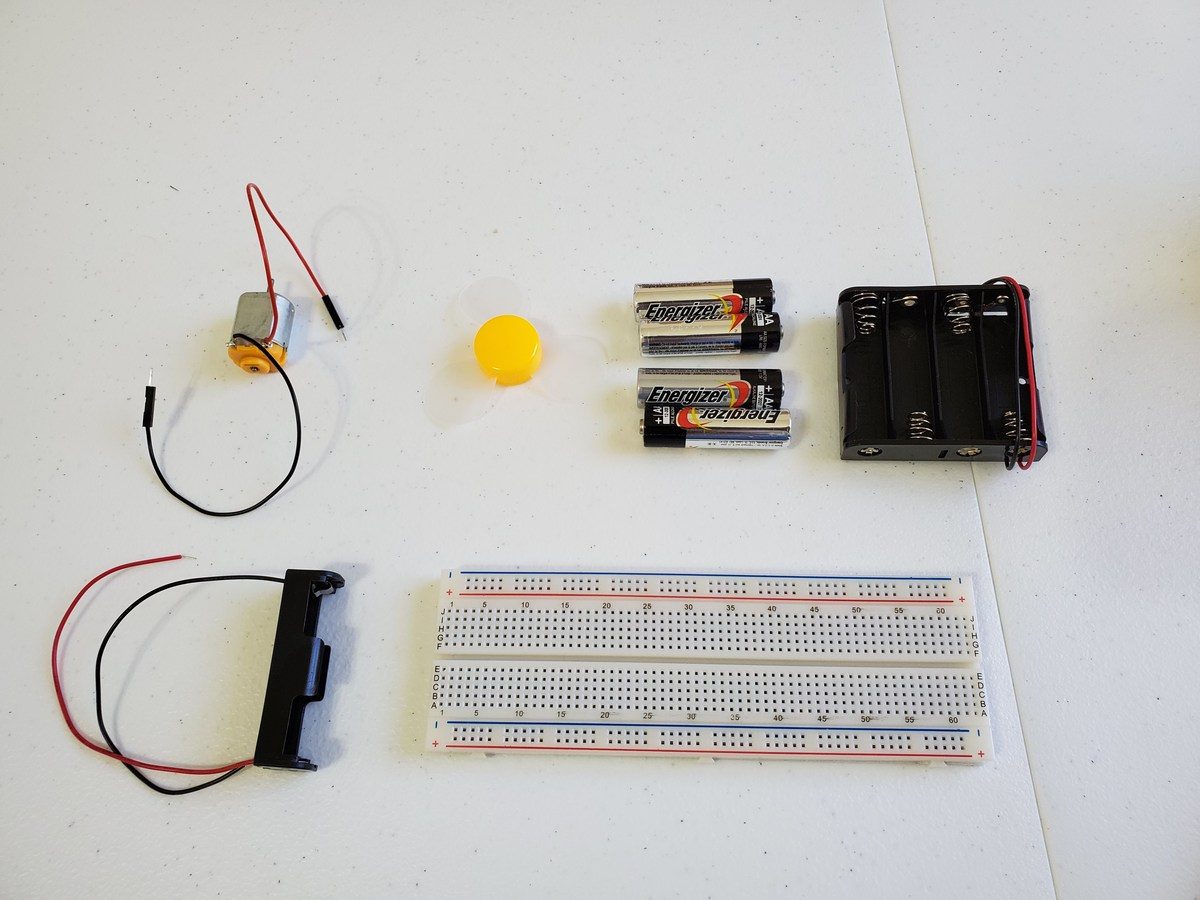 In this post, I’ll show you how to control the speed and direction of a small 3-6V DC motor.

The following components are used in this project:

In order to make a motor move, it needs a power source. Start by, putting one AA battery into the battery holder.

Now place the black lead of the battery holder into the negative rail of the solderless breadboard. The propeller should be spinning right now. Congrats! That is how you make a motor move.

Changing the Direction of the Motor

Increasing the Speed of the Motor

In order to increase the speed of the motor, we need to add more voltage. A standard AA battery is 1.5 volts. How do we make the motor spin four times as fast? We need to use four AA batteries in series instead of one. Four batteries have a voltage of 6 volts, which is four times the voltage a single AA battery.

You should see the motor spinning four times as fast as it was previously. That’s it! 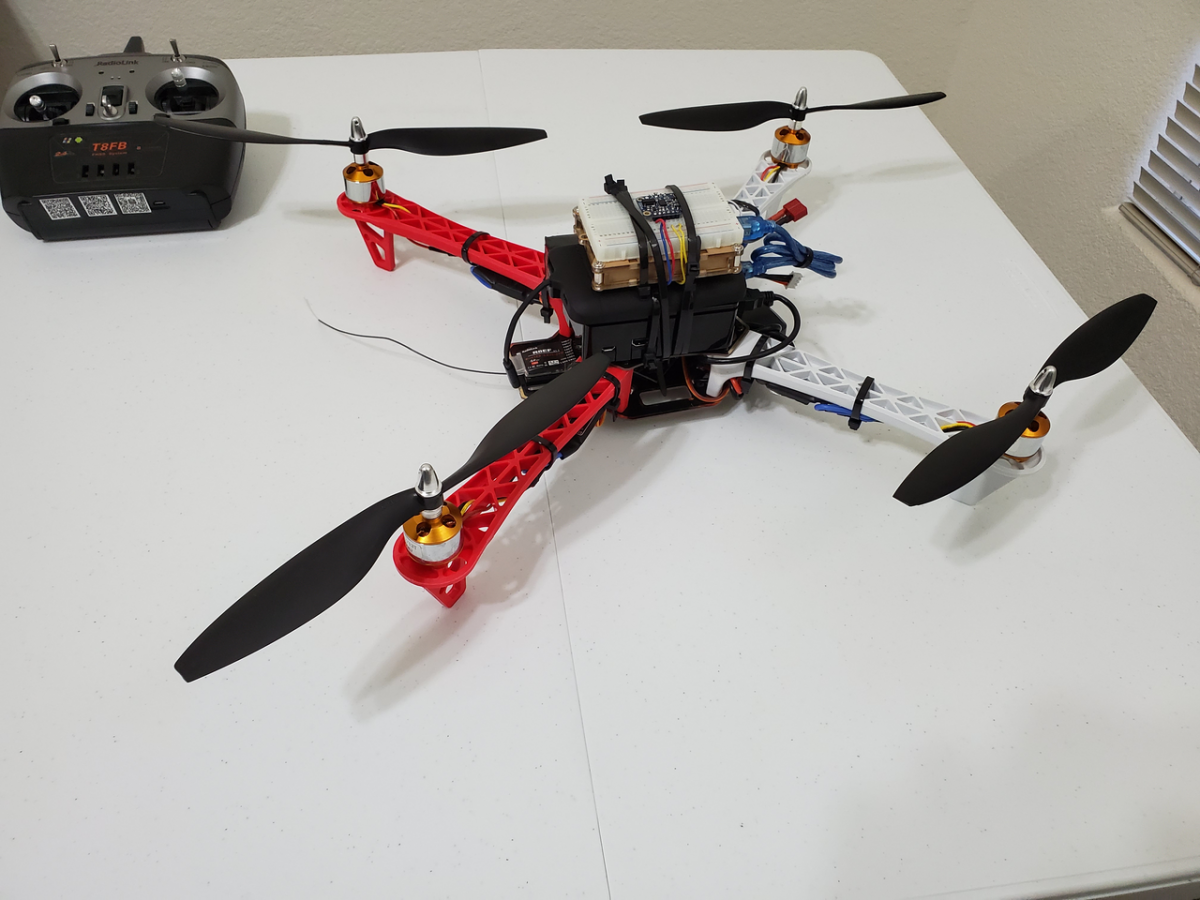 In this post, I’ll show you how to send roll, pitch, and yaw data over I2C using Raspberry Pi and Arduino. We’ll also capture GPS data on the Raspberry Pi to make things interesting for when I mount everything on a quadcopter.

Here are the steps for the GPS Poller, responsible for capturing Latitude+Longitude+Altitude data on the Raspberry Pi:

Here are the steps for the IMU I2C program on the Arduino, responsible for capturing Roll+Pitch+Yaw data and sending to the Raspberry Pi:

Here are the steps for the I2C Python program on the Raspberry Pi, responsible for sending messages and requesting IMU data via I2C from the Arduino slave:

The most straightforward way to connect the Arduino board to the Raspberry Pi is using the USB cable, as I have done in previous projects. However, we can also use I2C. I2C uses two lines: SDA (data) and SCL (clock). It also uses GND (ground).

Here are the connections that I made between the Raspberry Pi and the Arduino:

Here is the schematic I followed.

The BNO055 (IMU) was wired to the Arduino Uno using the solderless breadboard as follows:

To get started with the implementation, I tested the GPS device to see if I can successfully capture GPS latitude + longitude + altitude data on the Raspberry Pi and save it to a text file. This data will later get sent via Bluetooth from Raspberry Pi to my Host computer (HP Omen laptop with Windows 10).

GPS was connected to the Raspberry Pi via the USB cord. The commands for this are as follows:

To start the GPS stream, I typed:

To display the GPS data, I typed the following command:

Other commands I could have run are gpsmon and xgps.

Sometimes the GPS data did not show up immediately. When that occurred, I rebooted the Raspberry Pi by typing the following command:

More specifically, I will type:

The output.txt was created, and the data was logged in the file. However, it is more useful to output the GPS data in a more user-friendly format. To do this, I will run a Python script that is a GPS polling program. The code for this program is located in the Software section later in this report.

I clicked File -> New File. I then added the code and saved the file as GPSPoller.py.

To run the script, I typed

Here is the output of the locations.csv file. For the actual code when I flew the quadcopter, this file was named gps_data.txt.

Here is how gps_data.txt looks:

Next I connected Arduino to Raspberry Pi via I2C as pictured earlier in this section. I also connected them via USB in order to provide the Arduino with power and to easily upload sketches to the Arduino. BNO055 connects to Arduino.

After writing the Arduino code for I2C communication and IMU data capture, I uploaded the code to the board. I then needed to enable I2C on the Raspberry Pi. I configured Raspberry Pi accordingly by going to Preferences under the main menu, and then clicking Raspberry Pi Configuration -> Interfaces -> Enable I2C.

I now installed the Python I2C library by using the command:

It was already installed. I then clicked:

I had my Arduino Uno attached to the Raspberry Pi via I2C. I wanted to check that it’s attached and find its I2C address.

From a Terminal window on my Raspberry Pi, I typed the following commands to fetch and install the i2c-tools:

It was already installed.

Next, I ran the following command:

Next, I needed to write the code in Python that the Raspberry Pi can use to make requests for IMU data from the Arduino. That code, as I mentioned above, is in the Software section of this post. I will run this Python script in the terminal window and redirect the IMU data response from the Arduino slave to a text file.

The command to run the Python program is as follows:

A file named imu_data.txt will capture the Roll+Pitch+Yaw data. Here is how the data looks:

Here is the Python script that logs the GPS latitude + longitude + altitude data into a text file on the Raspberry Pi. Don’t be scared at how long the code is. Just copy and paste it into your file:

Here is the code for the IMU I2C program on the Arduino, responsible for capturing Roll+Pitch+Yaw data and sending to the Raspberry Pi:

Here is the code for the I2C Python program on the Raspberry Pi, responsible for sending messages and requesting IMU data via I2C from the Arduino slave: 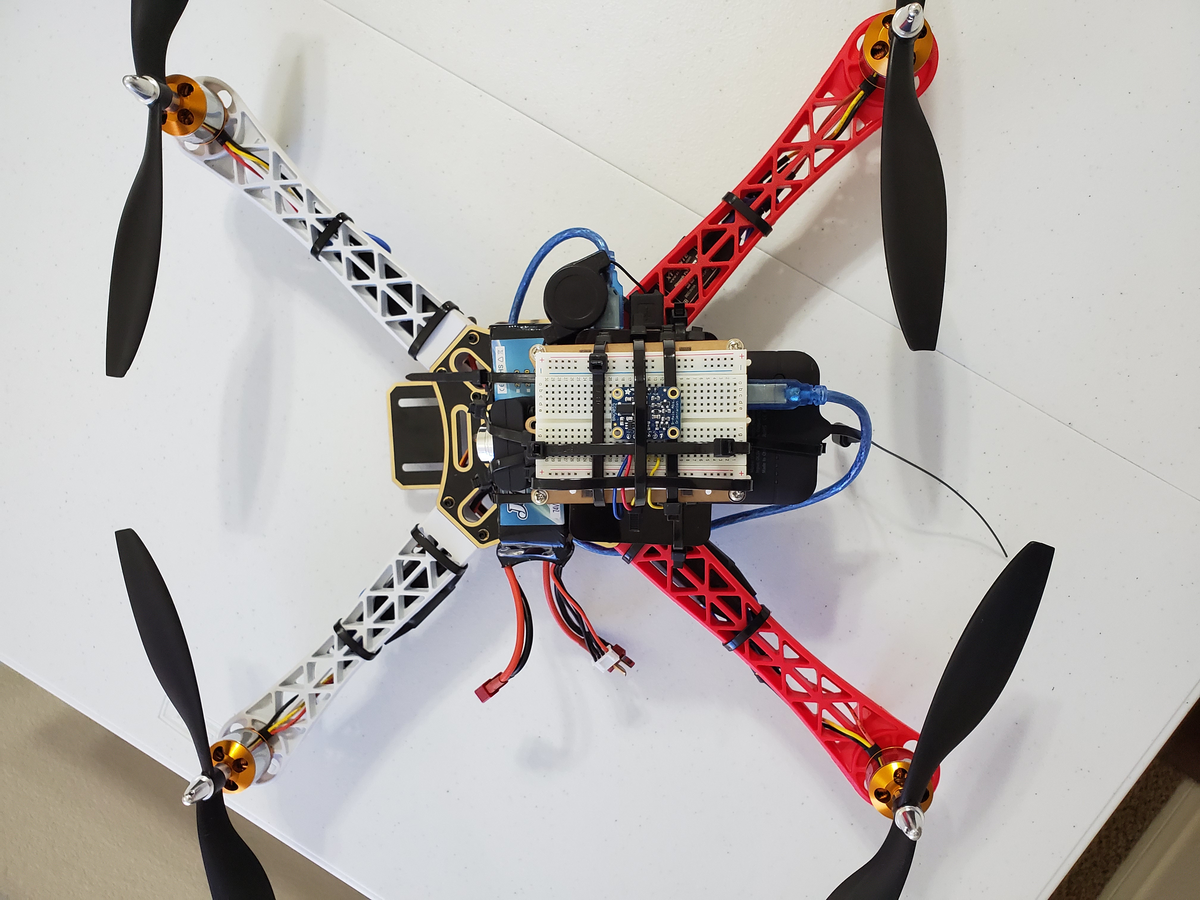 In this post, I’ll show you how to send roll, pitch, and yaw data over Bluetooth using Raspberry Pi and Arduino.

Here are the steps for the software of the system:

My Adafruit BNO055 Absolute Orientation Sensor was already setup from my Wifi roll, pitch, and yaw project. I made some modifications to the software though, which are presented in the Software section.

The BNO055 was wired to the Arduino Uno using the solderless breadboard as follows:

The challenge in this project is to set up Bluetooth on my Raspberry Pi and send the Roll+Pitch+Yaw data to my host computer.

First, I installed the packages that will enable me to use Bluetooth on my Raspberry Pi.

Here is a description of the packages:

Once the packages were downloaded and installed, I typed:

None of that worked, so I tried the steps here to configure the Bluetooth. Bluetooth was back!

I made sure that I turned Bluetooth to on inside my Windows settings.

I paired with the Raspberry Pi. On the actual Raspberry Pi, I made sure to click “Make Discoverable” under the Bluetooth Manager settings.

I went back to my Windows laptop and clicked “Bluetooth” under Add a device.

I added the Raspberry Pi.

The Raspberry Pi and my Windows computer are now paired via Bluetooth.

To access the Bluetooth graphical settings menu, on the Raspberry Pi desktop, I clicked Menu, located in the upper left corner of the screen, scrolled down to Preferences with the cursor and clicked Bluetooth Manager. From there I clicked “Send Files to Device” to send a test text file via Bluetooth from the Raspberry Pi to the Windows computer.

I used the same hardware as the Wifi-based roll, pitch, and yaw project.

Here is the code for the program I developed. (Note that after you load the sketch to Arduino, the code runs automatically whenever the Arduino is connected to power. That could be via a battery or power directly from the Raspberry Pi):