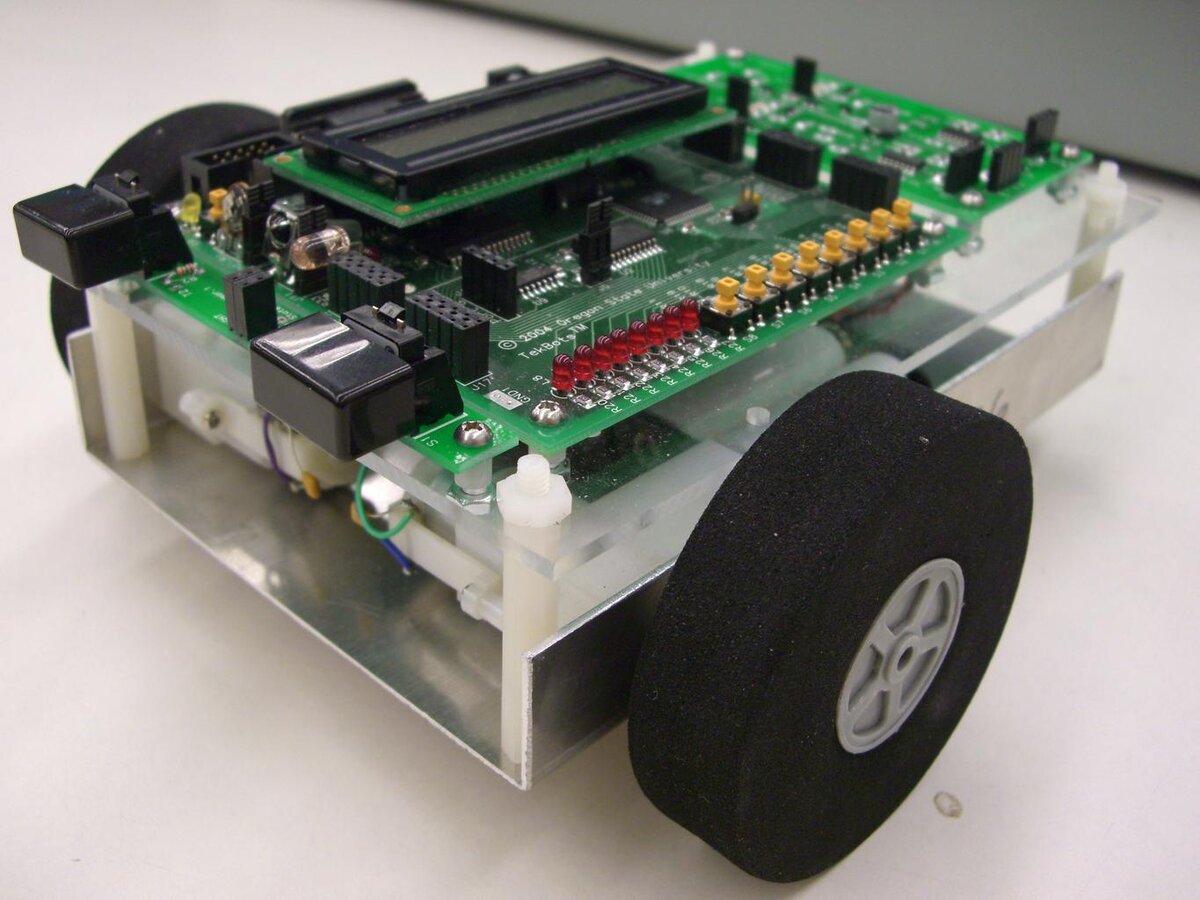 There are a lot of tutorials on YouTube if you don’t have the prerequisites above (e.g. Khan Academy).

What is a State Space Model?

A state space model (often called the state transition model) is a mathematical equation that represents the motion of a robotic system from one timestep to the next. It shows how the current position (e.g. X, Y coordinate) and orientation (yaw (heading) angle γ) of the robot in the world is impacted by changes to the control inputs into the robot (e.g. velocity in meters per second…often represented by the variable v).

Note: In a real-world scenario, we would need to represent the world the robot is in (e.g. a room in your house, etc.) as an x,y,z coordinate grid.

Consider the mobile robot below. It is moving around on the flat x-y coordinate plane.

Let’s look at it from an aerial view.

Note that x and y as well as the yaw angle γ are in the global reference frame.

The yaw angle γ describes the rotation around the z-axis (coming out of the page in the image above) in the counterclockwise direction (from the x axis). The units for the yaw angle are typically radians.

ω is the rotation rate (i.e. angular velocity or yaw rate) around the global z axis. Typically the units on this variable is radians per second.

In terms of the global reference frame we can break v down into two components:

In most of my applications, I express the velocity in meters per second.

Using trigonometry, we know that:

Therefore, with respect to the global reference frame, the robot’s motion equations are as follows:

We move forward one timestep dt. What is the state of the robot at time t? In other words, where is the robot location, and how is the robot oriented?

Converting the Equations to a State Space Model

We now know how to describe the motion of the robot mathematically. However the equation above is nonlinear. For some applications, like using the Kalman Filter (I’ll cover Kalman Filters in a future post), we need to make our state space equations linear.

…and convert it into a form that looks like the equation of a line? In mathematical jargon, we want to make the equation above a linear discrete-time state space model of the following form.

xt is our entire current state vector [xt, yt,γt]  (i.e. note xt in bold is the entire state vector…don’t get that confused with xt, which is just the x coordinate of the robot at time t)

I’ll get to what the A and B matrices represent later in this post.

Let’s write out the full form of the linear state space model equation:

Let’s go through this equation term by term to make sure we understand everything so we can convert this equation below into the form above:

How to Calculate the A Matrix

The A matrix expresses how the state of the system [x position,y position,yaw angle γ] changes from t-1 to t when no control command is executed (i.e. when we don’t give any speed (velocity) commands to the robot).

Typically a robot on wheels only drives when the wheels are commanded to turn. Therefore, for this case, A is the identity matrix (Note that A is sometimes F in the literature).

Formally, to calculate A, you start with the equation for each state vector variable. In our mobile robot example, that is this stuff below.

Our system is expressed as a nonlinear system now because the state is a function of cosines and sines (which are nonlinear trigonometric operations).

To get our state space model in this form…

…we need to “linearize” the nonlinear equations. To do this, we need to calculate the Jacobian, which is nothing more than a fancy name for “matrix of partial derivatives.”

Do you remember the equation for a straight line from grade school: y=mx+b? m is the slope. It is “change in y / change in x”.

You can consider the Jacobian a slope on steroids. It represents how fast a group of variables (as opposed to just one variable…(e.g. m = rise/run = change in y/change in x) are changing with respect to another group of variables.

You start with this here:

You will have to calculate 9 partial derivatives in total for this example.

Again, if you are a bit rusty on calculating partial derivatives, there are some good tutorials online. We’ll do an example calculation now so you can see how this works.

Let’s calculate the first partial derivative in the upper left corner of the matrix.

So, 1 goes in the upper-left corner of the matrix.

If you calculate all 9 partial derivatives above, you’ll get:

which is the identity matrix.

How to Calculate the B Matrix

The B matrix in our running example of a mobile robot is a 3×2 matrix.

The control inputs in this example are the linear velocity (v) and the angular velocity around the z axis, ω (also known as the “yaw rate”).

The B matrix expresses how the state of the system (i.e. [x,y,γ]) changes from t-1 to t due to the control commands (i.e. control inputs v and ω)

Since we’re dealing with a robotic car here, we know that if we apply forward and angular velocity commands to the car, the car will move.

The equation for B is as follows. We need to calculate yet another Jacobian matrix. However, unlike our calculation for the A matrix, we need to compute the partial derivative of the state vector at time t with respect to the control inputs at time t-1.

If you calculate the 6 partial derivatives, you’ll get this for the B matrix below:

Ok, so how do we get from this:

We now know the A and B matrices, so we can plug those in. The final state space model for our differential drive robot is as follows:

The world isn’t perfect. Sometimes the robot might not act the way you would expect when you want it to execute a specific velocity command.

It is often common to add a noise term to the state space model to account for randomness in the world. The equation would then be:

In this section, I’ll show you code in Python for the state space model we have developed in this tutorial. We will assume:

The output will show the state of the robot at the next timestep, time t. I’ll name the file state_space_model.py.

Make sure you have NumPy installed before you run the code. NumPy is a scientific computing library for Python.

If you’re using Anaconda, you can type:

Alternatively, you can type:

Here is the code. You can copy and paste this code into your favorite IDE and then run it.

And that’s it for the fundamentals of state space modeling. Once you know the physics of how a robotic system moves from one timestep to the next, you can create a mathematical model in state space form.