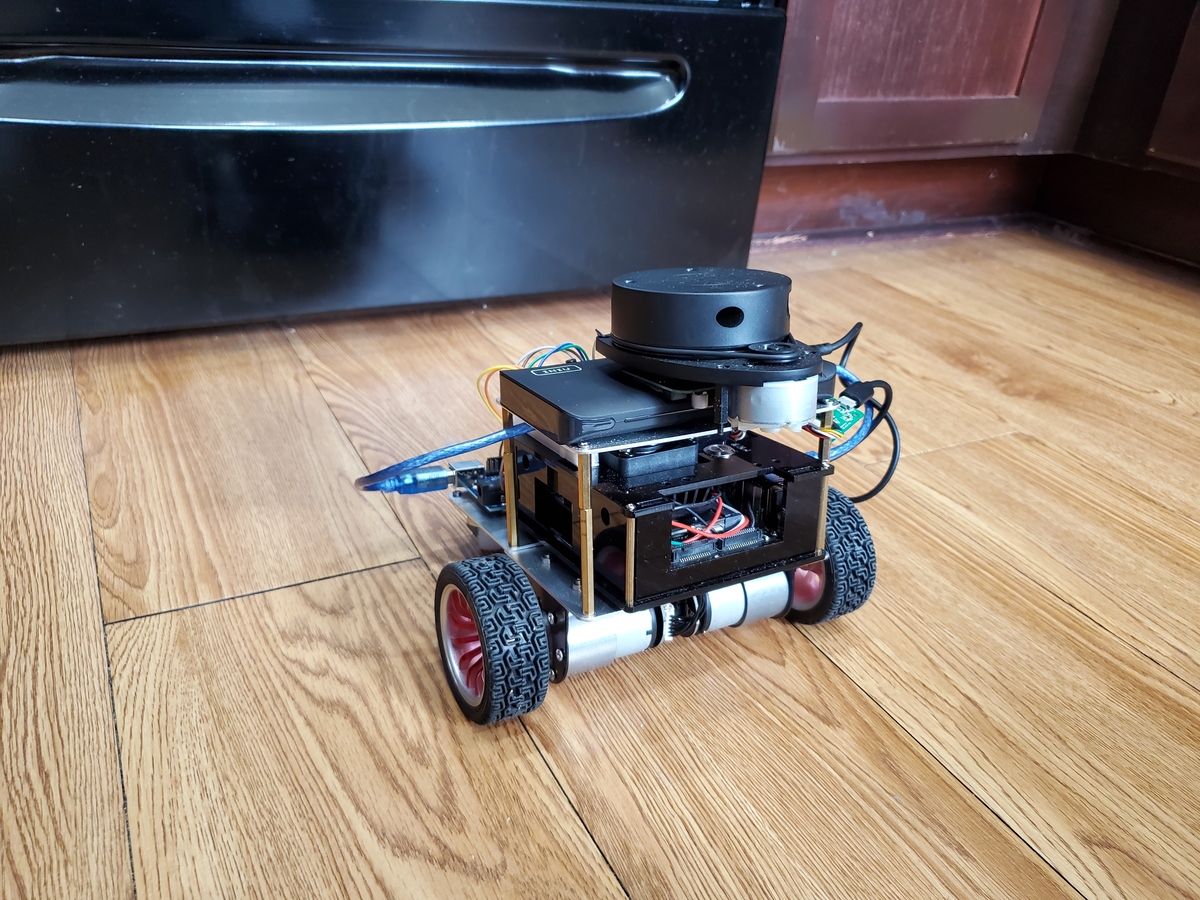 You know how to create a ROS launch file.

Why Coordinate Frames Are Important?

Suppose we have a LIDAR mounted on top of a wheeled robot like in the cover image of this tutorial. The job of the LIDAR is to provide data about the distances to objects in the environment.

The LIDAR might detect an object at 100 cm away, for example…but what does that mean in terms of the robot base frame? If the LIDAR is mounted on the front part of the robot, 10 cm forward from the center point of the robot’s base frame, the object might actually be 110 cm away from the robot.

Check out the first part of this post at the official ROS website which has a good discussion of why coordinate frames are so important for a robot.

Standard Coordinate Frames in ROS for a Mobile Robot

Below are the standard coordinate frames for a basic two wheeled differential drive robot.

The official ROS documents have an explanation of these coordinate frames, but let’s briefly define the main ones.

If you have other sensors on your robot, like an IMU, you can have a coordinate frame for that as well.

Fortunately, ROS has a package called tf to handle all these coordinate transforms for us.

For coordinate frames that don’t change relative to each other through time (e.g. laser_link to base_link stays static because the laser is attached to the robot), we use the Static Transform Publisher.

For coordinate frames that do change relative to each other through time (e.g. map to base_link), we use tf broadcasters and listeners. A lot of ROS packages handle these moving coordinate frame transforms for you, so you often don’t need to write these yourself.

Here is the syntax:

If we want, for example, the map and odometry frame to be equivalent, here is the code you would write inside a ROS launch file:

map -> odom transform tells us the position and orientation of the starting point of the robot (i.e. odom coordinate frame, which is the child) inside the map’s coordinate frame (i.e. the parent).

In our example above, we assume that the odom frame does not move relative to the map frame over time.

Odom to Base Footprint

Base Footprint to Base Link

base_footprint -> base_link is a static transform because both coordinate frames are fixed to each other. The robot moves, and the coordinate frame of its “footprint” will move.

In this case above, we assume that the origin of the base_link coordinate frame (i.e. center of the robot) is located 0.09 meters above its footprint.

Base Link to Laser

base_link -> laser transform gives us the position and orientation of the laser inside the base_link’s coordinate frame. This transform is static.

Base Link to IMU

base_link -> imu transform gives us the position and orientation of the IMU (inertial measurement unit…commonly a BNO055 sensor) inside the base_link’s coordinate frame. This transform is static.

That’s it for the basics of coordinate frames and static transform publishers in ROS. Keep building!