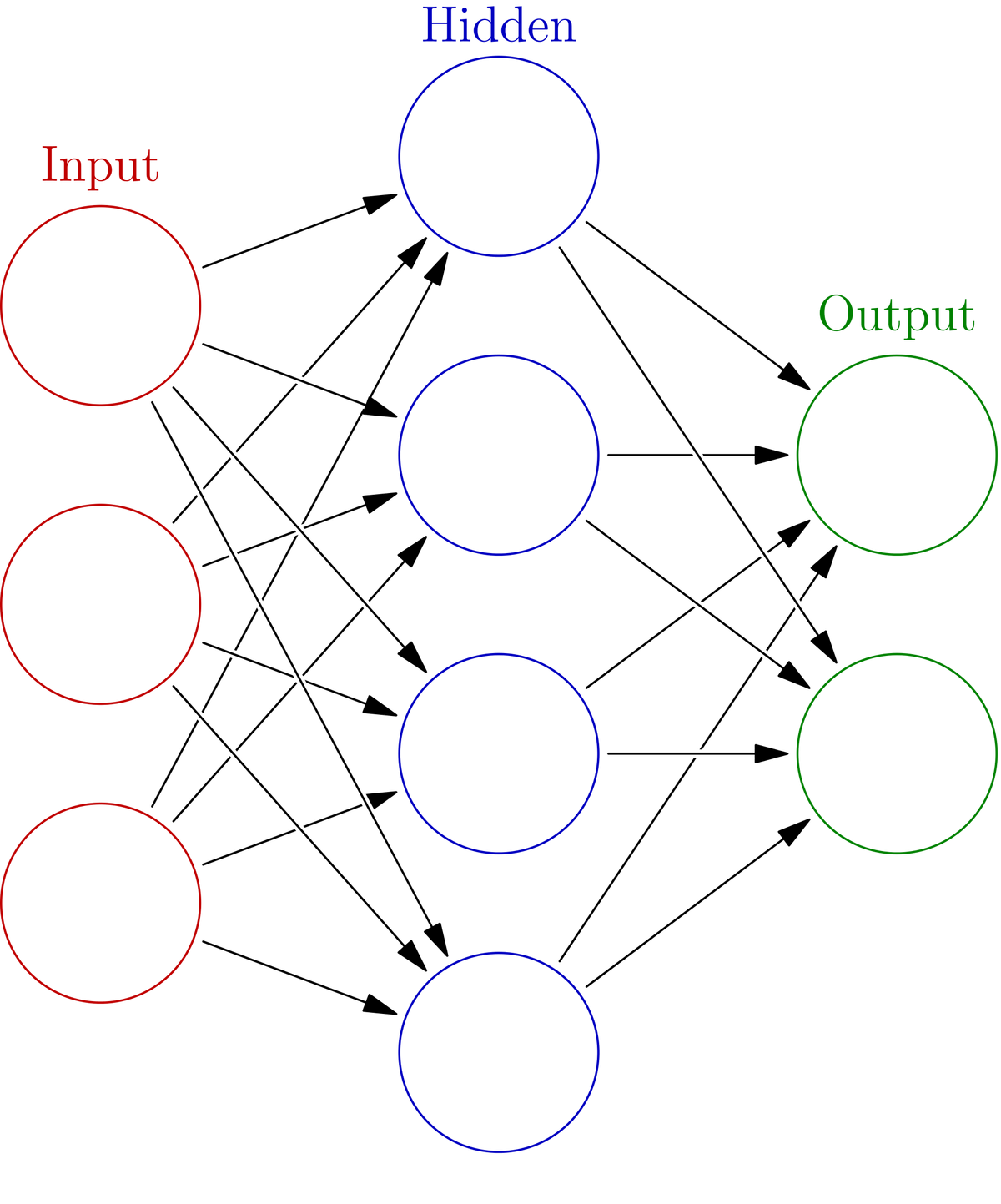 In this post, I will walk you through how to build an artificial feedforward neural network trained with backpropagation, step-by-step. We will not use any fancy machine learning libraries, only basic Python libraries like Pandas and Numpy.

We will use our neural network to do the following:

The classification accuracy of the algorithms on the data sets will be evaluated as follows, using five-fold stratified cross-validation:

What is an Artificial Feedforward Neural Network Trained with Backpropagation?

An artificial feed-forward neural network (also known as multilayer perceptron) trained with backpropagation is an old machine learning technique that was developed in order to have machines that can mimic the brain. Neural networks were the focus of a lot of machine learning research during the 1980s and early 1990s but declined in popularity during the late 1990s.

The Brain as Inspiration for Artificial Neural Networks

In order to understand neural networks, it helps to first take a look at the basic architecture of the human brain. The brain has 1011 neurons (Alpaydin, 2014). Neurons are cells inside the brain that process information.

Each neuron contains a number of input wires called dendrites. Each neuron also has one output wire called an axon. The axon is used to send messages to other neurons. The axon of a sending neuron is connected to the dendrites of the receiving neuron via a synapse.

So, in short, a neuron receives inputs from dendrites, performs a computation, and sends the output to other neurons via the axon. This process is how information flows through the brain. The messages sent between neurons are in the form of electric pulses.

An artificial neural network, the one used in machine learning, is a simplified model of the actual human neural network explained above. It is typically composed of zero or more layers.

Each layer of the neural network is made up of nodes (analogous to neurons in the brain). Nodes of one layer are connected to nodes in another layer by connection weights, which are typically just floating-point numbers (e.g. 0.23342341). These numbers represent the strength of the connection between two nodes.

The job of a node in a hidden layer is to:

Thus, the output from the nodes in a given layer becomes the input for all nodes in the next layer.

The output layer of a network does steps 1-3 above. However, the result of the computation from step #3 is a class prediction instead of an input to another layer (since the output layer is the final layer).

Here is a diagram of the process I explained above:

Here is a diagram showing a single layer neural network:

b stands for the bias term. This is a constant. It is like the b in the equation for a line, y = mx + b. It enables the model to have flexibility because, without that bias term, you cannot as easily adapt the weighted sum of inputs (i.e. mx) to fit the data (i.e. in the example of a simple line, the line cannot move up and down the y-axis without that b term).

Here is a similar diagram, but now it is a two-layer neural network instead of single layer.

And here is one last way to look at the same thing I explained above:

Note that the yellow circles on the left represent the input values. w represents the weights. The sigma inside the box means that we calculated the weighted sum of the input values. We run that through the activation function f(S)…e.g. sigmoid function. And then out of that, pops the output, which is passed on to the nodes in the following layer.

The objective during the training phase of a neural network is to determine all the connection weights. At the start of training, the weights of the network are initialized to small random values close to 0. After this step, training proceeds to the two main phases of the algorithm: forward propagation and backpropagation.

During the forward propagation phase of a neural network, we process one instance (i.e. one set of inputs) at a time. Hidden layers extract important features contained in the input data by computing a weighted sum of the inputs and running the result through the logistic sigmoid activation function. This output relays to nodes in the next hidden layer where the data is transformed yet again. This process continues until the data reaches the output layer.

The prediction error is then propagated backward from the output layer to the input layer. Blame for the error is assigned to each node in each layer, and then the weights of each node of the neural network are updated accordingly (with the goal to make more accurate class predictions for the next instance that flows through the neural network) using stochastic gradient descent for the weight optimization procedure.

The forward propagation and backpropagation phases continue for a certain number of epochs. A single epoch finishes when each training instance has been processed exactly once.

Once the neural network has been trained, it can be used to make predictions on new, unseen test instances. Test instances flow through the network one-by-one, and the resulting output (which is a vector of class probabilities) determines the classification.

Below is a helpful video by Andrew Ng, a professor at Stanford University, that explains neural networks and is helpful for getting your head around the math. The video gets pretty complicated in some spots (esp. where he starts writing all sorts of mathematical notation and derivatives). My advice is to lookup anything that he explains that isn’t clear. Take it slow as you are learning about neural networks. There is no rush. This stuff isn’t easy to understand on your first encounter with it. Over time, the fog will begin to lift, and you will be able to understand how it all works.

The Logistic Regression algorithm was implemented from scratch. The Breast Cancer, Glass, Iris, Soybean (small), and Vote data sets were preprocessed to meet the input requirements of the algorithms. I used five-fold stratified cross-validation to evaluate the performance of the models.

The program then adds two additional columns for the testing set.

There were 16 missing attribute values, each denoted with a “?”. I chose a random number between 1 and 10 (inclusive) to fill in the data.

This glass data set contains 214 instances, 10 attributes, and 7 classes (German, 1987). The purpose of the data set is to identify the type of glass.

There are no missing values in this data set.

This data set contains 3 classes of 50 instances each (150 instances in total), where each class refers to a different type of iris plant (Fisher, 1988).

There were no missing attribute values.

This soybean (small) data set contains 47 instances, 35 attributes, and 4 classes (Michalski, 1980). The purpose of the data set is to determine the disease type.

There are no missing values in this data set.

This data set includes votes for each of the U.S. House of Representatives Congressmen (435 instances) on the 16 key votes identified by the Congressional Quarterly Almanac (Schlimmer, 1987). The purpose of the data set is to identify the representative as either a Democrat or Republican.

I used stochastic gradient descent for optimizing the weights.

Here is a good video that explains stochastic gradient descent.

The logistic (sigmoid) activation function was used for the nodes in the neural network.

Description of Any Tuning Process Applied

Some tuning was performed in this project. The learning rate was set to 0.1, which was different than the 0.01 value that is often used for multi-layer feedforward neural networks (Montavon, 2012). Lower values resulted in much longer training times and did not result in large improvements in classification accuracy.

Number of Nodes per Hidden Layer

Here are the preprocessed data sets:

Here is the full code for the neural network. This is all you need to run the program:

Here are the trace runs:

Here are the results:

Here are the test statistics for each data set:

The breast cancer data set results were in line with what I expected. The simpler model, the one with no hidden layers, ended up generating the highest classification accuracy. Classification accuracy was just short of 97%. In other words, the neural network that had no hidden layers successfully classified a patient as either malignant or benign with an almost 97% accuracy.

These results also suggest that the amount of training data has a direct impact on performance. Higher amounts of data (699 instances in this case) can lead to better learning and better classification accuracy on new, unseen instances.

The performance of the neural network on the glass data set was the worst out of all of the data sets. The ability of the network to correctly identify the type of glass given the attribute values never exceeded 70%.

I hypothesize that the poor performance on the glass data set is due to the high numbers of classes combined with a relatively smaller data set.

The reason for the high standard deviation of the classification accuracy is unclear, but I hypothesize it has to do with the relatively small number of training instances. Future work would need to be performed with the soybean large dataset available from the UCI Machine Learning Repository to see if these results remain consistent.

The results of the soybean runs suggest that large numbers of relevant attributes can help a machine learning algorithm create more accurate classifications.

The vote data set did not yield the stellar performance of the soybean data set, but classification accuracy was still solid at ~96% using one hidden layer and eight nodes per hidden layer. These results are in line with what I expected because voting behavior should provide a powerful predictor of whether a candidate is a Democrat or Republican. I would have been surprised had I observed classification accuracies that were lower since members of Congress tend to vote along party lines on most issues.

Other conclusions include the following:

Michalski, R. (1980). Learning by being told and learning from examples: an experimental comparison of the two methodes of knowledge acquisition in the context of developing an expert system for soybean disease diagnosis. International Journal of Policy Analysis and Information Systems, 4(2), 125-161.