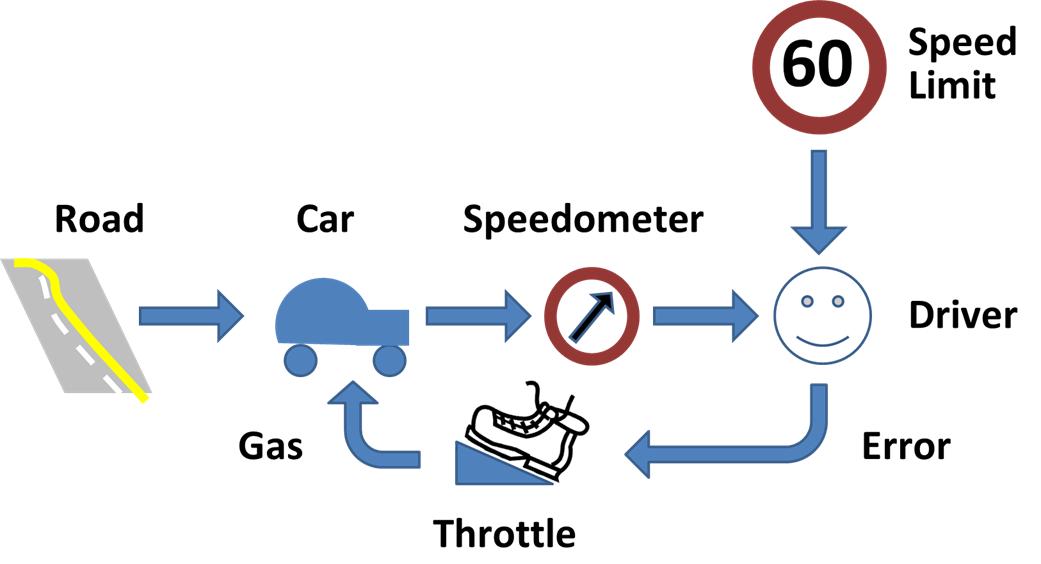 In this tutorial, we will learn about the Linear Quadratic Regulator (LQR). At the end, I’ll show you my example implementation of LQR in Python.

Here are a couple of real-world examples where you might find LQR control:

What is Optimal Feedback Control?

How do you accomplish both of these tasks?

Both the robot and the drone need to have a feedback control algorithm running inside them.

The control algorithm’s job will be to output control signals (e.g. velocity of the wheels on the robot car, propeller speed, etc.) that reduce the error between the actual state (e.g. current position of the robot car or altitude for the drone) and the desired state.

The sensors on the robot car/drone need to read the state of the system and feed that information back to the controller.

The controller compares the actual state (i.e. the sensor information) with the desired state and then generates the best possible (i.e. optimal) control signals (often known as “system input”) that will reduce or eliminate that error.

In Example 1, the desired state is the (x,y) coordinate or GPS position along a predetermined path. At each timestep, you want the control algorithm to generate velocity commands for your robot that minimize the error between your current actual state (i.e. position) and the desired position (i.e. on top of the predetermined path).

Here is how all that looks in a picture:

Your robot car and drone go through a continuous process of sensing the state of the system and then generating the best possible control commands to minimize the difference between the desired state xdesired and actual state xt.

The goal at each timestep (as the robot car drives along the path or the drone hovers in the air) is to use sensor feedback to drive the state error towards 0, where:

How Can We Drive State Error to 0 Efficiently?

Let’s revisit our examples from the previous section.

Suppose in Example 2, a strong wind from a thunderstorm began to blow the drone downward, causing it to fall way below the desired altitude.

To correct its altitude, the drone could:

Both Action 1 and 2 have pros and cons.

How can we write a smart controller that balances both objectives? We want the system to both:

This, my friends, is where the Linear Quadratic Regulator (LQR) comes to the rescue.

LQR solves a common problem when we’re trying to optimally control a robotic system. Going back to our robot car example, let’s draw its diagram. Here is our real world robot:

Let’s model this robot in a 3D diagram with coordinate axes x, y, and z:

Here is the bird’s-eye view in 2D form:

(If that equation above doesn’t make a lot of sense, please check out the tutorial in the Prerequisites of this article where I dive into it in detail)

We want to choose control inputs ut-1….such that

Both of these are competing objectives. A large u can drive the state error down really fast. A small u means the state error will remain really large. LQR was designed to solve this problem.

The purpose of LQR is to compute the optimal control inputs ut-1 (i.e. velocity of the wheels of a robotic car, motors for propellers of a drone) given:

that minimize the cumulative “cost.”

LQR is all about the cost function. It does some fancy math to come up with a function (this Wikipedia page shows the function) that expresses a “cost” (you could also substitute the word “penalty”) that is a function of both state error and actuator effort.

LQR determines the point along the cost curve where the “cost function” is minimized…thereby balancing both objectives of keeping state error and actuator effort minimized.

The cost curve below is for illustration purposes only. I’m using it just to explain this concept. In reality, the cost curve does not look like this. I’m using this graphic to convey to you the idea that LQR is all about finding the optimal control commands (i.e. linear velocity, angular velocity in the case of our robot car example) at which the actuator-effort state-error cost function is at a minimum. And from calculus, we know that the minimum of this cost function occurs at the point where the derivative (i.e. slope) is equal to 0.

We use some fancy math (I’ll get into this later) to find out what this point is.

Q is a square matrix that has the same number of rows and columns as there are states.

Q penalizes bad performance (e.g. penalizes large differences between where you want the robot to be vs. where it actually is in the world)

Q has positive values along the diagonal and zeros elsewhere.

Q enables us to target states where we want low error by making the corresponding value of Q large.

I typically start out with the identity matrix and then tweak the values through trial and error. In a 3-state system, such as with our two-wheeled robot car, Q would be the following 3×3 matrix:

Similarly, R is the input cost matrix. This matrix penalizes actuator effort (i.e. rotation of the motors on the wheels).

The input cost matrix often has positive values along the diagonal. We can use this matrix to target actuator states where we want low actuator effort by making the corresponding value of R large.

A lot of people start with the identity matrix, but I’ll start out with some low numbers. You want to tweak the values through trial and error.

In a case where we have two control inputs into a robotic system, here would be my starting 2×2 R matrix:

LQR uses a technique called dynamic programming. You don’t need to worry what that means.

At each timestep t as the robot or drone moves in the world, the optimal control input is calculated using a series of for loops (where we run each for loop ~N times) that spit out the u (i.e. control inputs) that corresponds to the minimal overall cost.

Here is the pseudocode for LQR. Hang tight. Go through this slowly. There is a lot of mathematical notation thrown around, and I want you to leave this tutorial with a solid understanding of LQR.

Let’s walk through this together. The pseudocode is in bold italics, and my comments are in plain text. You see below that the LQR function accepts 7 parameters.

I typically set N to some arbitrary integer like 50. Solutions to LQR problems are obtained recursively, starting at the last time step, and working backwards in time to the first time step.

In other words, the for loops (we’ll get to these in a second) need to go through lots of iterations (50 in this case) to reach a stable value for P (we’ll cover P in the next step).

This ugly equation above is called the Discrete-time Algebraic Riccati equation. Don’t be intimidated by it. You’ll notice that you have the values for all the terms on the right side of the equation. All that is required is plugging in values and computing the answer at each iteration step i so that you can fill in the list P.

K will hold the optimal feedback gain values. This is the important matrix that, when multiplied by the state error, will generate the optimal control inputs (see next step).

Optimal control input is u_star. It is the last value we calculated in the previous step above. It is at the very end of the u list.

Return the optimal control inputs. These inputs will be sent to our robot so that it can move to a new state (i.e. new x position, y position, and yaw angle γ).

Just for your future reference, you’ll commonly see the LQR algorithm written like this in the literature (and in college lectures):

Let’s get back to our two-wheeled mobile robot. It has three states (like in the state space modeling tutorial.) The forward kinematics can be modeled as:

The state space model is as follows:

The control inputs in this example are the linear velocity (v) — which has components in the x and y direction —  and the angular velocity around the z axis, ω (also known as the “yaw rate”).

We let dt = 1 second. dt represents the interval between timesteps.

Now suppose we want our robot to drive to coordinate (x=2,y=2). This is our desired state (i.e. our goal destination).

Also, we want the robot to face due north (i.e. 90 degrees (1.5708 radians) yaw angle) once it reaches the desired state. Therefore, our desired state is:

We launch our robot at time t-1, and we feed it our desired state. The robot must use the LQR algorithm to solve for the optimal control inputs that minimize both the state error and actuator effort. In other words, we want the robot to get from (x=0, y=0) to (x=2, y=2) and face due north once we get there. However, we don’t want to get there so fast so that we drain the car’s battery.

In other words, we use LQR to solve for this:

And then plug that vector into this:

to get the state at time t.

Let’s take a look at all this in Python code.

Here is my Python implementation of the LQR. Don’t be intimidated by all the lines of code. Just go through it one step at a time. Take your time. You can copy and paste the entire thing into your favorite IDE.

Remember to play with the values along the diagonals of the Q and R matrices. You’ll see in my code that the Q matrix has been tweaked a bit.

You can see in the output that it took about 3 seconds for the robot to reach the goal position and orientation. The LQR algorithm did its job well.

Note that you can remove the maximum linear and angular velocity constraints if you have issues in getting the correct output. You can remove these constraints by going to the state_space_model method inside the code I pasted in the previous section.

That’s it for the fundamentals of LQR. If you ever run across LQR in the future and need a refresher, just come back to this tutorial.