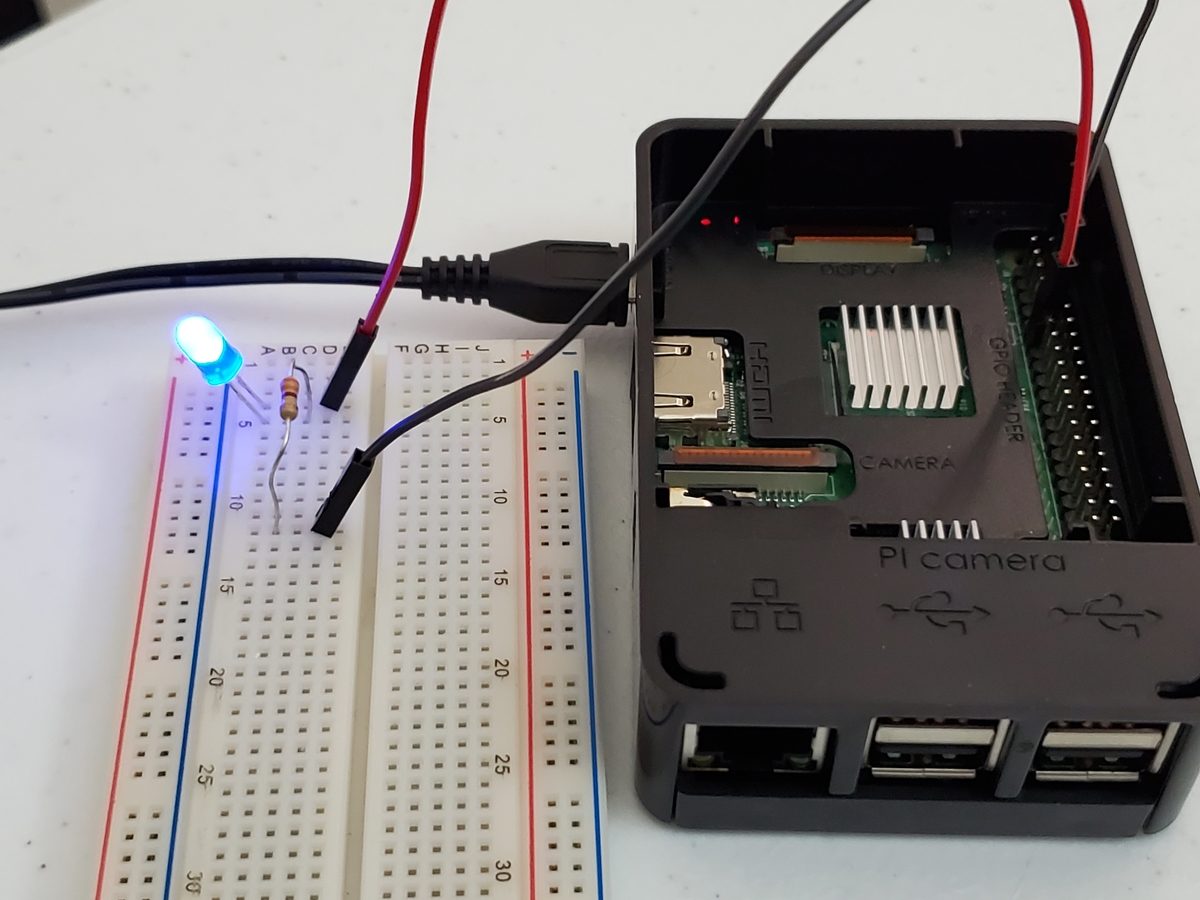 In this post, I’ll show you how to blink an LED on Raspberry Pi 3 Model B+. This project shows you how to use the Raspberry Pi’s GPIO (General Purpose Input Output) pins as an output to manipulate an external device (in this case the LED).

Set up the Raspberry Pi

Set up the Raspberry Pi as explained in this video:

From the Raspberry Pi desktop, click the Pi logo, and go to Preferences -> Raspberry Pi Configuration. Make sure your settings look like the image below and reboot (we’ll make use of these settings in future posts):

Before we dive into the LED project, let’s have a look at the Raspberry Pi terminal.

The terminal is a way to communicate with your computer. Back in the 1980s and early 1990s when I first started using computers, the command-line interface of the terminal was the main way to send commands to your computer.

Back in those days computers did not have the processing power they have now. If you were born in the 1990s or later, you probably have only interacted with your computer via a graphical user interface. I like to use the command-line interface for robotics projects because it is more efficient, and you can tell the computer exactly what to do.

That black window you are looking at is the terminal. Typing ls will display all the files and folder in that directory. Blue items are directories. Green text shows our username (i.e “pi”).

To change to a directory, you use the cd Directory Name command. For example cd Documents, gets you to the Documents directory.

Determine What Resistor to Use

Raspberry Pi is powered by 5V micro USB (2.5A). Each GPIO (General Purpose Input Output) pin supplies 3.3V (our source voltage) and can provide 16mA of current. Since 3.3V > 2.2V, we know that Raspberry Pi has enough voltage to power the LED.

Forward voltage is also the amount of voltage lost when a current runs through the LED. Consider it the “voltage drop” across the LED. To understand the basics of this concept, check out this 3D animation.

Now, we calculate the value of the resistor we need using Ohm’s Law (V = I * R):

So, we need at least a 75 ohm resistor. I’ll chose 330 ohms. The higher the resistor value you use, the dimmer the LED.

What is the current (represented as the capital letter ‘I’) in this case?

Now, we need to calculate how much power the resistor the LED can dissipate before it fails. We use this equation (P = VI):

Our resistor is rated at 0.25 watts, so we have more than enough cushion. We are good to go!

Wire the LED to the Breadboard

Here is the diagram to use to wire (using male to female jumper wire) the 330 ohm resistor and 5mm LED to the Raspberry Pi. That kink in one of the LEDs represents the long leg of the LED:

Now we need to write a program in Python to blink the LED.

I have a folder in my Home Directory named robot. I get to this directory by opening up a terminal window in Raspberry Pi and typing:

Now, we open up the Nano text editor to enable us to write the Python program. We name it led_blink.py. Here is the terminal command:

We type in this python code:

We then press CTRL-X, then Y, then press Enter to save the program and return to the terminal.

To run the program, we type:

Your LED should be blinking. If it doesn’t blink, try connecting the red positive lead to another GPIO pin on the Raspberry Pi.

To stop the program, you press CTRL-C.

You can also try different color LEDs, as shown below.