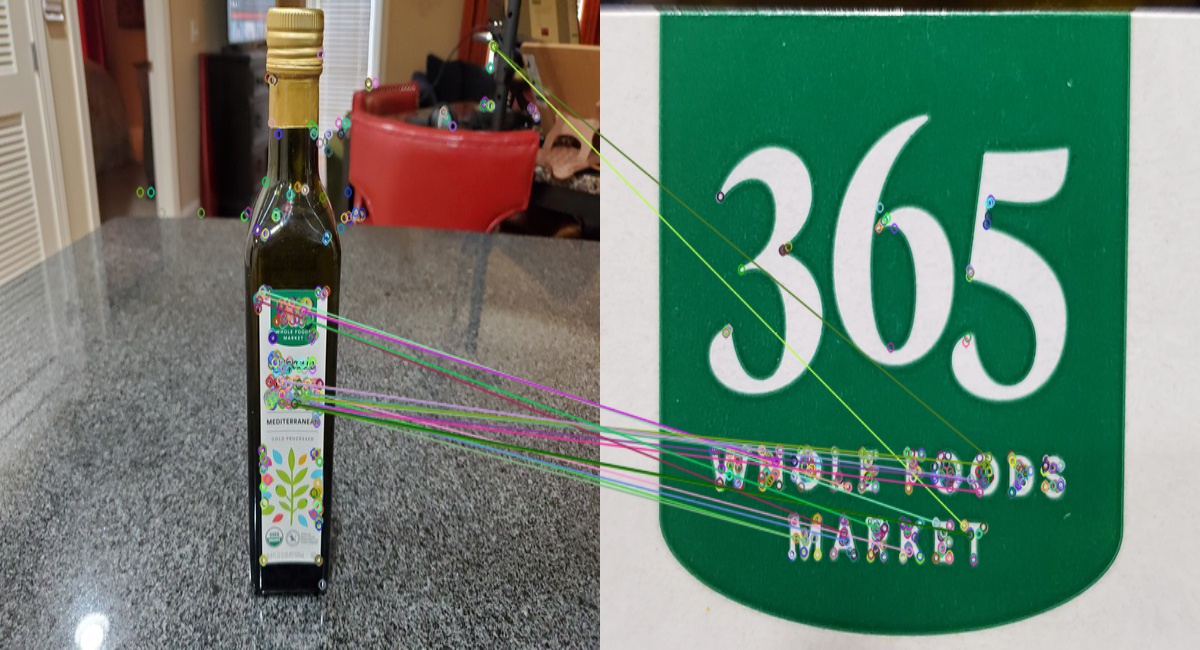 In this tutorial, we will implement various image feature detection (a.k.a. feature extraction) and description algorithms using OpenCV, the computer vision library for Python. I’ll explain what a feature is later in this post.

We will also look at an example of how to match features between two images. This process is called feature matching.

What is a Feature?

Do you remember when you were a kid, and you played with puzzles? The objective was to put the puzzle pieces together. When the puzzle was all assembled, you would be able to see the big picture, which was usually some person, place, thing, or combination of all three.

What enabled you to successfully complete the puzzle? Each puzzle piece contained some clues…perhaps an edge, a corner, a particular color pattern, etc. You used these clues to assemble the puzzle.

The “clues” in the example I gave above are image features. A feature in computer vision is a region of interest in an image that is unique and easy to recognize. Features include things like, points, edges, blobs, and corners.

For example, suppose you saw this feature?

You see some shaped, edges, and corners. These features are clues to what this object might be.

Now, let’s say we also have this feature.

Can you recognize what this object is?

Many Americans and people who have traveled to New York City would guess that this is the Statue of Liberty. And in fact, it is.

With just two features, you were able to identify this object. Computers follow a similar process when you run a feature detection algorithm to perform object recognition.

The Python computer vision library OpenCV has a number of algorithms to detect features in an image. We will explore these algorithms in this tutorial.

Before we get started, let’s make sure we have all the software packages installed. Check to see if you have OpenCV installed on your machine. If you are using Anaconda, you can type:

Alternatively, you can type:

Find an image of any size. Here is mine:

Before we get started developing our program, let’s take a look at some definitions.

The algorithms for features fall into two categories: feature detectors and feature descriptors.

A feature descriptor encodes that feature into a numerical “fingerprint”. Feature description makes a feature uniquely identifiable from other features in the image.

We can then use the numerical fingerprint to identify the feature even if the image undergoes some type of distortion.

A corner is an area of an image that has a large variation in pixel color intensity values in all directions. One popular algorithm for detecting corners in an image is called the Harris Corner Detector.

Here is some basic code for the Harris Corner Detector. I named my file harris_corner_detector.py.

Here is my image before:

Here is my image after:

For a more detailed example, check out my post “Detect the Corners of Objects Using Harris Corner Detector.”

Another corner detection algorithm is called Shi-Tomasi. Let’s run this algorithm on the same image and see what we get. Here is the code. I named the file shi_tomasi_corner_detect.py.

Here is the image after running the program:

When we rotate an image or change its size, how can we make sure the features don’t change? The methods I’ve used above aren’t good at handling this scenario.

OpenCV has an algorithm called SIFT that is able to detect features in an image regardless of changes to its size or orientation. This property of SIFT gives it an advantage over other feature detection algorithms which fail when you make transformations to an image.

Here is an example of code that uses SIFT:

Here is the before:

Here is the after. Each of those circles indicates the size of that feature. The line inside the circle indicates the orientation of the feature:

SURF is a faster version of SIFT. It is another way to find features in an image.

A lot of the feature detection algorithms we have looked at so far work well in different applications. However, they aren’t fast enough for some robotics use cases (e.g. SLAM).

The FAST algorithm, implemented here, is a really fast algorithm for detecting corners in an image.

A blob is another type of feature in an image. A blob is a region in an image with similar pixel intensity values. Another definition you will hear is that a blob is a light on dark or a dark on light area of an image.

Three popular blob detection algorithms are Laplacian of Gaussian (LoG), Difference of Gaussian (DoG), and Determinant of Hessian (DoH).
Basic implementations of these blob detectors are at this page on the scikit-image website. Scikit-image is an image processing library for Python.

The HoG algorithm breaks an image down into small sections and calculates the gradient and orientation in each section. This information is then gathered into bins to compute histograms. These histograms give an image numerical “fingerprints” that make it uniquely identifiable.

A basic implementation of HoG is at this page.

BRIEF is a fast, efficient alternative to SIFT. A sample implementation of BRIEF is here at the OpenCV website.

SIFT was patented for many years, and SURF is still a patented algorithm. ORB was created in 2011 as a free alternative to these algorithms. It combines the FAST and BRIEF algorithms. You can find a basic example of ORB at the OpenCV website.

For example, consider this Whole Foods logo. This logo will be our training image.

Here is the code you need to run. My file is called feature_matching_orb.py.

Here is the result:

If you want to dive deeper into feature matching algorithms (Homography, RANSAC, Brute-Force Matcher, FLANN, etc.), check out the official tutorials on the OpenCV website. This page and this page have some basic examples.