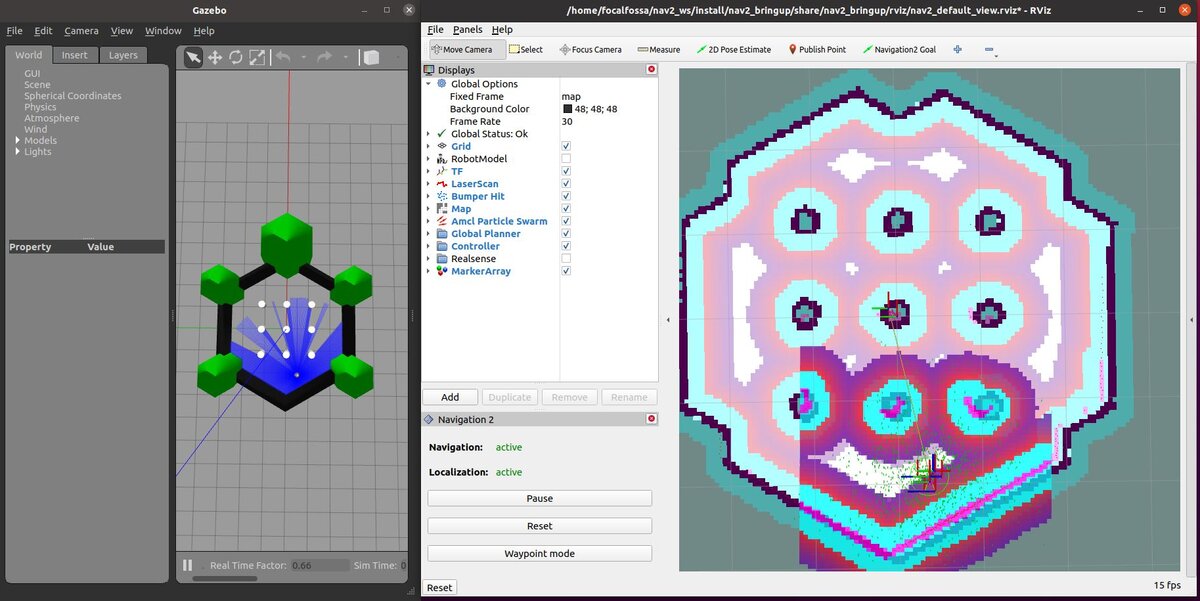 In this tutorial, we will explore Navigation2 (Nav2), which is a collection of tools for ROS 2 that enable a robot to go from point A to point B safely. We will also take a look at a SLAM demo with a robot named Turtlebot 3. Here will be our final output:

In order to navigate properly, a robot needs to have a map (mapping), know where it is located (localization), and have a plan for getting from point A to point B (path planning).

***Note: The official instructions for installing and building Nav2 are here. Please check out that link to get the latest instructions. The steps below are valid as of the date of this blog post and will likely be different by the time you read this.***

Once you’re done with this tutorial, you can head over to my Ultimate Guide to the ROS 2 Navigation Stack.

To install Nav2, open a new terminal window, and type the following commands:

Open a new terminal window, and type the following commands. One right after the other.

Your computer might say something like “executing command [sudo ……”. That is fine. Just wait, and let your system finish doing what it is doing.

It took a while to install Nav2 on my machine. Just be patient.

You noticed that we installed Nav2 from the source and also installed it using the Ubuntu package manager. The reason we had to do both is that the Ubuntu package manager installs some dependencies that are necessary for Nav2 to run. However, we also need to build Nav2 from the source (using the Github clone command we did above) so that we can customize the packages in Nav2 to our liking.

When Nav2 is finished installing, open your bash file.

Add these lines to the bottom of the file. You can get the latest information on what to add on this link.

Save the file, and close it.

Build it again, just to make sure everything is in order

Gazebo will also open, but it may take a while.

Move the Robot From Point A to Point B

Now go to the rviz2 screen.

Set the initial pose of the robot by clicking the “2D Pose Estimate” on top of the rviz2 screen. Then click on the map in the estimated position where the robot is in Gazebo.

Set a goal for the robot to move to. Click “Navigation2 Goal” button and choose a destination. The wheeled robot will move to the goal destination.

In the bottom left of the screen, you can Pause and Reset.

Press CTRL + C on all terminal windows to close down the programs.

Click the 2D Pose Estimate button and click on the rviz screen an estimate position where the robot is in Gazebo.

Then click the Navigation2 Goal button and click on an area of rviz where you want the robot to go.

Press CTRL+C in all terminals to shut everything down.

Here is another command you can run. This command launches Turtlebot3 and the SLAM package in a single command.